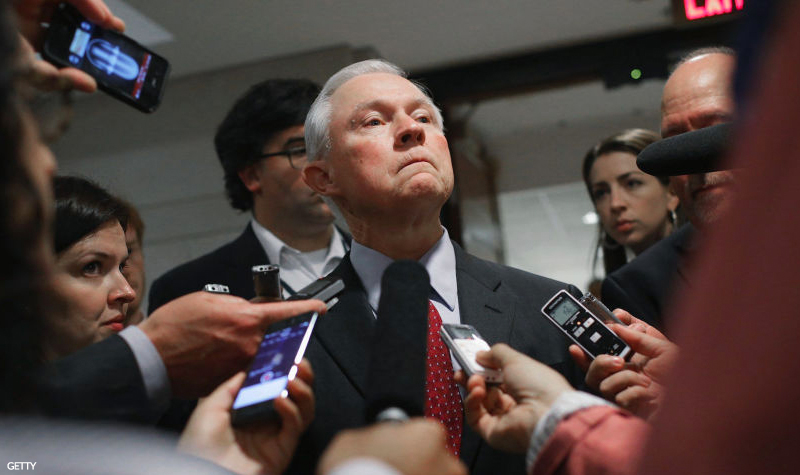 During confirmation hearings for his appointment to Attorney General on Tuesday, Sen. Jeff Sessions (R-AL) sidestepped questions regarding the ongoing conflict between federal and state marijuana laws, adding further uncertainty to an already ambiguous stance on marijuana legalization by the incoming Trump administration.

Worse, some comments made during questioning could be interpreted as leaving the door open for enforcing federal law in states that have legalized medical or adult use of marijuana, potentially crippling the marijuana industry and preventing patient access.

Senator Patrick Leahy, a Democrat representing the medical marijuana state of Vermont, asked Sessions if he would use federal resources to “investigate and prosecute sick people using marijuana in accordance with state law” even though it might be in violation of federal law.

“I won’t commit to never enforcing federal law, Senator Leahy, but absolutely it is a problem of resources for the federal government,” Sessions responded.

While 28 states, the District of Columbia, and the US territories of Guam and Puerto Rico have all authorized the use of medical marijuana, cannabis remains illegal at the federal level. Despite this conflict between state and federal laws, the Obama Administration issued a directive that patients and businesses operating in compliance of state law should not be prosecuted under federal laws, as long as those states have effective regulations in place to oversee the marijuana industry.

“In terms of marijuana and legalization, I think that should be a state issue, state-by-state.” – Donald Trump

Sen. Leahy asked Sessions if he agreed with those policies, to which the AG nominee gave another ambiguous answer.

“I think some of [the guidelines] are truly valuable in evaluating cases,” Sessions said. “Using good judgment on how to handle these cases will be a responsibility of mine. I know it won’t be an easy decision but I will try to do my duty in a fair and just way.”

Utah Senator Mike Lee, a Republican, then followed up with Sessions by asking questions on marijuana policy and states’ rights. Sessions’ answer was chilling.

“Well, I think one obvious concern is that the United States Congress has made the possession of marijuana in every state and distribution of it an illegal act,” he told fellow senators Tuesday. “So if that’s something that’s not desired any longer, Congress should pass a law to change the rule. It’s not so much the attorney general’s job to decide what laws to enforce. We should do our job and enforce laws effectively as we’re able.”

Instead of helping to clarify the Trump administration’s stance on state marijuana laws, Sessions’ comments have added further confusion to an already unclear policy. While on the campaign trail, President-elect Trump said that marijuana legalization was an issue for the states to decide. “In terms of marijuana and legalization, I think that should be a state issue, state-by-state,” Trump said at a rally in Reno, Nevada in October 2015, when seeking the Republican nomination. Since those remarks were made, however, Trump has been silent.

Marijuana reform advocates have been pressing the administration for clarification since the election, but to date there has been no clear policy on marijuana policy by the Trump Administration. But if the Trump administration’s marijuana policy reflects his statements on the campaign trail, comments made today by a Trump spokesperson could indicate that Sessions would be on a short leash.

“When you come into a Trump administration, it’s the Trump agenda you’re implementing and not your own,” spokesman Sean Spicer said Tuesday on the Fox News Channel. “I think Senator Sessions is well aware of that.”

Following Tuesdays events, which failed to clear the uncertainty surrounding the future of medical marijuana access and marijuana legalization nationwide, even reform advocates had mixed feelings.

“After finally being put on the spot and questioned on the issue, we are no closer to clarity in regards to Sessions’ plans for how to treat state marijuana laws than we were yesterday,” Erik Altieri, executive director of NORML, wrote in a blog post. “If anything, his comments are a cause for concern and can be interpreted as leaving the door open for enforcing federal law in legalized states.”

“The vague answers given by Senator Jeff Sessions during today’s Attorney General confirmation hearing provided little comfort for the 2 million American patients who rely on state-run medical cannabis programs to provide them with physician-recommended medicine,” said Mike Liszewski, Director of Government Affairs for Americans for Safe Access. “Each of the 44 states that have medical cannabis programs, including 15 states with patient access to CBD (such as Sessions home state of Alabama), technically violate federal law.”

“Sessions still has an opportunity to set the record straight and pledge that he will respect medical cannabis patients and the state programs upon which they rely. Similarly, Congress can put the issue to rest by passing legislation to respect state medical laws,” Liszewski added.

“Senator Jeff Sessions’ response to questions about marijuana & federalism during his Attorney General confirmation hearing today was wishy-washy at best,” said Bill Piper from the Drug Policy Alliance. “Sessions has a long history of opposing marijuana reform, and nothing he said at the hearing suggests he has changed his mind. Hopefully he will clarify his position in his written response to Senators’ questions.”

The Marijuana Policy Project took a “cautiously optimistic” view of the day’s events, noting that Sessions didn’t promise a federal crackdown on the marijuana industry.

“It is notable that Sen. Sessions chose not to commit to vigorously enforcing federal prohibition laws in states that have reformed their marijuana laws,” said MPP Director of Federal Policies Robert Capecchi in a statement. He also recognized that enforcing federal marijuana laws would be dependent upon the availability of resources, the scarcity of which poses a problem.”

“He was given the opportunity to take an extreme prohibitionist approach and he passed on it,” Capecchi added. “We remain cautiously optimistic that the incoming administration will continue the current policy of not interfering with individuals and entities acting in compliance with state marijuana laws.”