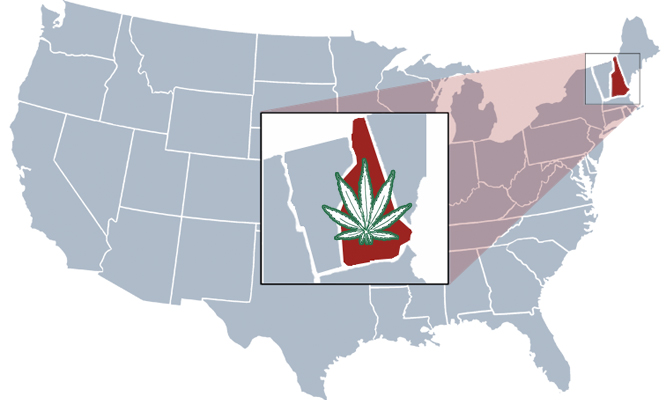 Nearly a dozen new bills have been filed in New Hampshire that are designed to vastly improve the state’s medical marijuana program. Changes include everything from adding additional qualifying health conditions to allowing patients to grow their own cannabis in the comfort of their own home. Below you’ll find a quick rundown of what is being considered in Concord.

House Bill 472, co-sponsored by four Democrats and one Republican, would allow registered patients and caregivers to cultivate limited amounts of marijuana. The bill allows for two mature cannabis plants and 12 immature plants, with a total canopy of no more than 50 square feet. While two mature plants may seem a little low — many states allow up to six — New Hampshire patients are currently not allowed to grow any.

Several bills seek to expand the list of ailments that qualify for medical marijuana in New Hampshire. Currently, the law lists the qualifying conditions as:

The current law also allows physicians to certify a patient for cannabis therapy if they suffer from a severely debilitating or terminal medical condition or its treatment that has produced at least one of the following:

House Bill 197 would add myelitis disorder/disease to the list of qualifying conditions. The bill is sponsored by four Democrats and two Republicans.

House Bill 222, sponsored by state Reps Brian Stone and Michael Vose (both Republicans), would make several changes to the existing qualifying conditions for medical marijuana, as well as add new ones. First, “severe pain” would be changed to “intractable or chronic” pain, and the requirement that a patient’s pain “has not responded to previously prescribed medication or surgical measures or for which other treatment options produced serious side effects” would be removed. The bill would also add post-traumatic stress disorder (PTSD) and opioid addiction or dependency to the list of qualifying conditions.

Senate Bill 15, sponsored by Sen. John Reagan (R), would add “severe pain that has not responded to previously prescribed medication or surgical measures or for which other treatment options produced serious side effects.” Current law allows for severe pain to qualify, but only if it is associated with a “severely debilitating or terminal medical condition or its treatment.”

Senate Bill 17, sponsored by Sen. John Reagan (R), removes the requirement that a patient must be currently receiving antiviral treatment for hepatitis-c in order to qualify for medical marijuana. The bill was approved by the Senate in January and now awaits consideration by the House.

Senate Bill 144, sponsored by eight Republicans and seven Democrats, is small but powerful. If passed, it would change ” or one or more injuries that significantly interferes with daily activities as documented by the patient’s provider” to read “or one or more injuries or conditions that has resulted in one or more qualifying symptoms.” This bill also deletes the requirement that a doctor document how the injury affects activities of daily living on a patient’s medical marijuana certification, which is beneficial to a patient’s privacy.

Senate Bill 26, sponsored by Sen. John Reagan (R), is a simple measure that adds community living facilities to the definition of “facility caregiver,” which already includes residential care facilities, nursing homes, hospitals, or hospice houses licensed by the state — thanks to the passage of last year’s Senate Bill 419. That bill allows health care staff of these institutions can assist resident patients with medical cannabis therapy without the fear or risk of arrest by law enforcement.

Community living facilities are generally smaller residences than those already included in the facility caregiver protection. This year’s bill is quickly advancing through the state legislature, and has already been approved by the Senate by a voice vote. It will soon move to the House for consideration, and is expected to pass.

This is a developing story.