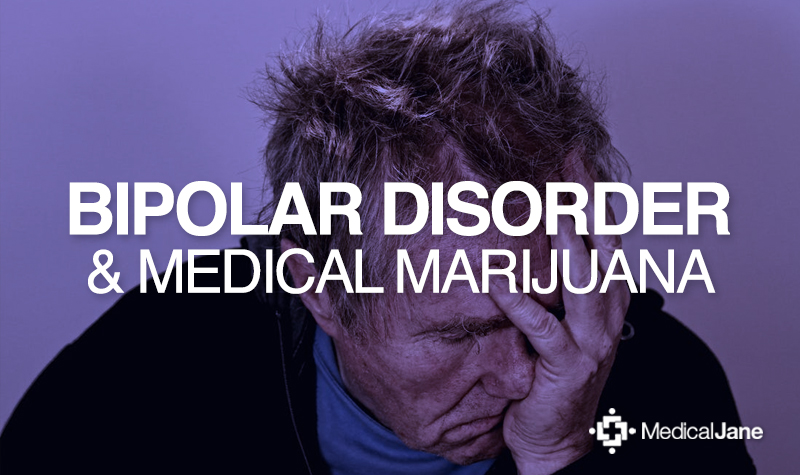 Coping With Bipolar Disorder: How Medical Marijuana Can Help

A person with bipolar disorder probably doesn’t fit the stereotype you have in mind. You might be surprised to learn that bipolar disorder isn’t just classified by out-of-control highs or suicidal lows. While these ups and downs certainly happen, there are also periods of normalcy mixed in on a regular basis.

Another common misconception about people diagnosed with bipolar disorder is that they spend more time experiencing depression as opposed to mania. This is because people suffering from bipolar disorder are more likely to seek help when they are having a depressive episode than when having a manic episode.

In fact, many people suffering from bipolar disorder keep their illness private for fear of judgment or punishment, especially in the workplace.

What is bipolar disorder?

A person’s medical history is important to accurately diagnose bipolar disorder because it is not a one-size-fits-all disease.

The symptoms of bipolar disorder can also mimic those of other ailments, and people with bipolar disorder typically have another disorder or disease such as anxiety disorder, thyroid disease, migraines and headaches, so it can be hard for a doctor to make an accurate diagnosis.

The condition can be controlled with self-management, a good treatment plan, and a high level of support.

Mania is buying 3 new televisions on impulse; thinking you can buy your favorite restaurant; or deciding to run a 5K with no training–and insisting you will come in first. Hypomania is mania with a tether, and while it may lessen some of the financial and personal disasters sparked by unchecked mania, it can still feel like going the wrong way on a one-way road.

What are the symptoms of bipolar disorder?

To gauge the severity of a mood episode, one should compare the intensity of the attitudes and behaviors experienced during these unusual periods of time to what is typical and normal for that person. While jumping out of a moving car is not typical for most people, something like blabbering and talking fast may be normal for one person but not for another.

Some people with bipolar disorder experience hypomania, a less severe form of mania. During a hypomania episode, a person may feel energized, productive, and euphoric — yet they may still feel in control. However, to others that know them well, the mood swings and fluctuations in attitudes and energy levels are very apparent and are a cause for concern. Without proper treatment, people with hypomania may develop severe mania and depression.

A person with severe episodes may also experience psychotic symptoms which tend to match the extreme mood, e.g., hallucinations or delusions. A person having a manic episode may believe he is something he is not, e.g., rich or famous; while a person having a depressive episode may believe he is worthless or a failure. Sometimes a person with bipolar disorder who occasionally has psychotic symptoms may be misdiagnosed with schizophrenia.

How is bipolar disorder diagnosed?

No single cause has been identified for bipolar disorder. Scientists believe several factors may contribute to the illness, including genetics, stress, and the structure of the brain itself.

It is important to talk to your healthcare professional(s). It is a good idea to get a complete physical and routine lab tests to rule out other conditions. If no obvious cause for the symptoms is found, a mental health professional, such as a psychiatrist who is experienced in diagnosing and treating bipolar disorder can perform a mental health evaluation. To be diagnosed with bipolar disorder, a person has to have had at least one episode of mania or hypomania.

Bipolar disorder does not discriminate – it can affect anyone

“I am mentally ill. I can say that. I am not ashamed of that. I survived that, I’m still surviving it, but bring it on. Better me than you.” —Fisher told Diane Sawyer on ABC PrimeTime in a 2000 interview

Carrie Fisher recently passed away at the age of 60 after suffering a cardiac arrest. Fisher may be known for her role in Star Wars as Princess Leia, but she is also well-known for battling relentlessly against the stigma of mental illnesses.

Fisher was diagnosed at age 29 with bipolar disorder. Throughout her life, she used her trademark humor and candor to shed light on the condition, and convey the powerful, life-changing message that there is no shame in a mental health diagnosis.

What is the treatment for bipolar disorder?

Ironically, conventional drugs used to treat bipolar disorder are mostly psychotropic drugs that can induce more of the symptoms a sufferer is trying to beat, like anxiety, nervousness, impaired judgment, mania, hypomania, hallucinations, feelings of worthlessness, psychosis, and suicidal thoughts.

Lithium is the best known medication for treating the disorder because it is a mood stabilizer and is effective in treating both mania and depression, as well as for preventing relapse. The bad news is that one-third of the patients who have taken lithium for over ten years have developed chronic renal failure from the drug, according to a study in the Journal of Psychopharmacology.

Sometimes antidepressants are used to treat bipolar depression, but this can be controversial because of the possibility that an antidepressant can trigger a switch into mania.

Behavioral or family focused therapies, as well as complementary health approaches such as meditation, faith and prayer, play a big part in developing self-management strategies for coping with bipolar disorder.

As you might expect from cannabis being labeled as a controlled substance, scientific research and reputable studies are limited. Having said that, there is a plethora of anecdotal evidence that shows promise that the right cannabis regimen can help patients manage some or all of their symptoms of a manic or depressive episode. Unfortunately, without more research it is also possible that cannabis could agitate other symptoms. Knowing your body and its signals will play a huge role in deciding how and if you incorporate cannabis into your treatment plan.

“So I said to her… ‘I don’t know if marijuana will help you enough but I would try it. If it doesn’t help you it surely is not going to hurt you.'” – Dr. Lester Grinspoon

In 1998, the Journal of Psychoactive Drugs published an article by Dr. Lester Grinspoon, an associate professor emeritus of psychiatry at the Harvard Medical School and well-recognized cannabis activist, highlighting case histories of sufferers who found cannabis to be an effective treatment option. Dr. Grinspoon wrote that until more research is conducted on medical marijuana and present social circumstances are changed, we will never know the full extent that cannabis can be used in the treatment of mental disorders.

Several years later, the Journal of Psychopharmacology published a review and discussion by C.H. Ashton, et al., exploring the therapeutic potential of cannabinoids in bipolar affective disorder. The review recognized that bipolar disorder is often poorly controlled by prescription drugs, and thus, the team was interested in determining if medical marijuana could provide mental health benefits.

Researchers undertook a literature review of cannabis use by patients with bipolar disorder and of the neuropharmacological properties of cannabinoids, and found that anecdotal reports suggest that some patients take it to alleviate symptoms of both mania and depression, thereby suggesting cannabis has possible therapeutic effects in this condition.

The study found that “cannabinoids Δ9-tetrahydrocannabinol (THC) and cannabidiol (CBD) may exert sedative, hypnotic, anxiolytic, antidepressant, antipsychotic and anticonvulsant effects. Pure synthetic cannabinoids, such as dronabinol and nabilone and specific plant extracts containing THC, CBD, or a mixture of the two in known concentrations, are available and can be delivered sublingually. Controlled trials of these cannabinoids as adjunctive medication in bipolar disorder are now indicated.”

Then in 2012, a study by Raphael J. Braga, et al., focused on the cognitive and clinical outcomes associated with cannabis use in patients with bipolar I disorder.

The objective of the Braga study was to compare clinical and neurocognitive measures in individuals with bipolar disorder with a history of cannabis use disorder (CUD) versus those without a history of CUD. The study compared the two groups on clinical and demographic variables, as well as on performance on neurocognitive tests. The study found that the CUD+ subjects demonstrated significantly better performance on measures of attention, processing speed, and working memory.

Although CUD is historically associated with psychosis and suggestive of poorer clinical prognosis, the Braga study interestingly revealed bipolar patients with a history of CUD had better neurocognitive performance as compared to patients with no history of CUD.

A 2015 study, published in the journal PLOS ONE in March, was led by Dr. Elizabeth Tyler of the Spectrum Centre for Mental Health Research at Lancaster University, United Kingdom, together with Professor Steven Jones and colleagues from the University of Manchester, Professor Christine Barrowclough, Nancy Black and Lesley-Anne Carter.

“The findings suggest that cannabis is not being used to self-medicate small changes in symptoms within the context of daily life. However, cannabis use itself may be associated with both positive and negative emotional states. We need to find out whether these relationships play out in the longer term as this may have an impact on a person’s course of bipolar disorder.” – Dr. Tyler

The findings of the Tyler study indicate that cannabis use is associated with a number of subsequent psychological effects; however, there was no evidence that individuals with bipolar disorder were using cannabis to self-medicate minor fluctuations in negative affect or bipolar disorder symptoms over the course of daily life.

In the most recent study, published in June 2016 in the journal PLOS ONE, Kelly A. Sagar, et al., set out to clarify the impact of bipolar disorder and cannabis use on cognitive function and mood.

The Sagar study found no significant differences between cognitive function in bipolar patients that smoked cannabis and those who didn’t. Furthermore, bipolar participants who regularly smoked cannabis reported notable reductions in mood symptoms each time they medicated with cannabis, indicating potential mood-stabilizing properties of cannabis in at least some participants. The current study also showed that cannabis use in bipolar patients may not result in additional impairment.

The information contained herein is provided for educational purposes only and is not intended to replace discussions with a healthcare provider.

There are 8 references in this article. Click here to view them all.