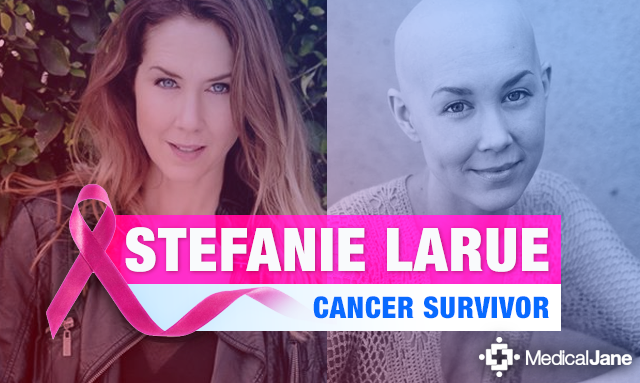 This article has been updated – Stefanie LaRue died on May 31, 2017, at her home in Venice Beach, California, after a 12-year-battle with Stage IV breast cancer. In 2005, when Stefanie was only 30, a lump was found in her breast. A series of doctors misdiagnosed her, simply sending her home with antibiotics and convincing her she was too young to have breast cancer. Stefanie became a well-known, outspoken advocate for women younger than 40 with breast cancer, garnering a large online following, speaking at conferences around the country and appearing on national TV networks, including CNN and NBC, Lifetime and The Hallmark Channel. Stefanie once said her best advice for newly diagnosed patients was to get educated and advocate for themselves. “I would just say: Be your own voice. Be your own advocate. Jump in, engage, interact, ask for help from others on the same journey. It’s about quality of life. Do the work. Do not live in fear … live in love.”

On the surface, Stefanie LaRue is a sweet girl with a hint of Texas in her voice. But like they say in the South, “she’s got a lot of fight in her.” Stefanie gives the term “breast cancer survivor” a new meaning. Every day she celebrates the time she may not have had.

In 2005, Stefanie’s world came to a halt. Her boyfriend discovered a lump in one of her breasts. At first, she was misdiagnosed by three different doctors and was told that she was too young for breast cancer. After all, she was only 30 years old at the time.

Stefanie was sent home several times with several rounds of antibiotics, which is quite telling of younger folks being misdiagnosed. By the time she could be tested thoroughly, the cancer had spread to her bones. Doctors diagnosed her with Stage 4 Metastatic Breast Cancer, which is cancer that has spread beyond the breast to other organs in the body. The prognosis was grim: she was given a year to live, at most.

Three weeks later, Stefanie began her first round of chemotherapy. To make matters worse, she had to to cope with her employer, who showed little sympathy for her situation. Despite her job in commercial real estate being very stressful, she was expected to work through her cancer treatment.

“It [cannabis oil] is the best medicine.” – Stefanie LaRue

In retrospect, she credits a nurse practitioner with saving her life. “She pulled me aside and told me, ‘you have to leave that job. Working under so much stress is going to kill you.’ She made a very proactive effort that day to help me.” It was difficult, but Stefanie took her advice.” It was devastating,” she said.

“It was hard having to leave that job and go on disability, but I believe that stress effects our emotions and our health,” she said. “I think working under all that pressure triggered my cancer.”

Stefanie filed for disability, finally taking time to focus on healing herself. She found help with an integrative oncologist at UCLA, where she learned how to make changes to her diet, use natural supplements, get acupuncture, and work on personal fitness; all of which are integrative, complimentary, and alternative treatments to go along with chemotherapy.

After six rounds of chemotherapy treatments, Stefanie had surgery to remove the cancer which ended up costing her all of her breast tissue.

Say “No” To Chemotherapy, “Yes” To Cannabis Oil

In 2013 Stefanie had a Video-Assisted Thoracoscopic Surgery (VATS) and the results were not good. This was now her third reoccurrence of cancer. The chemo sensitivity testing concluded there were five lines of chemo treatments that would work on the tumors.

Stefanie declined the treatment. “I did my homework. I researched as much as I could. I watched. I listened. I read. I contacted. I prayed. Most of all, I believed. I weighed my options, which were essentially chemotherapy or cannabis oil, and I decided to take the natural route this time…” she says.

Stefanie followed the Rick Simpson Oil (RSO) protocol until she was cancer-free. “Cannabis oil killed all of the tumors in my body. My monthly lab and quarterly scan results are proof that the cannabis oil treatment worked,” she says. Her doctor, who had previously been skeptical, now credits these “alternative” treatments as the reason for her speedy recovery.

Now that her cancer is gone, Stefanie takes a maintenance dose of .5 gram of concentrated cannabis oil per day and it seems to be working. Her last scan in December of 2014 showed no signs of cancerous tumors.

Stefanie began sharing her story with others, urging women to empower themselves. She works with various breast cancer organizations, with a focus on young women (under the age of 40) who have been diagnosed with cancer.

As far as the cannabis movement goes, Stefanie is in it for the long haul. According to her, “It is going to take our actual patient community to help fast track changing the laws federally so it is important that we share, support one another, and join forces in advocating together on this journey until we are not deemed as criminals any longer. Yes, change is happening, but it is not happening fast enough!”

When asked if she has a message for others with cancer, she pauses and says quietly, “I would just say: Be your own voice. Be your own advocate. Jump in, engage, interact, ask for help from others on the same journey. It’s about quality of life. Do the work. Do not live in fear … live in love.”

Stefanie LaRue, a well-known activist for young women with breast cancer, died on May 31, 2017, at her home in Venice Beach, California, after a 12-year-battle with breast cancer.Stefanie was just 30 years old when …