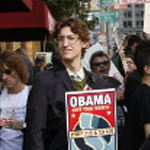 Hunter Holliman is the Operations Manager for Americans for Safe Access (ASA). After completing his Masters in Human Rights, Hunter came to ASA through his involvement with the San Francisco Chapter.

Having been a patient in California for nearly a decade, he also has a background in dispensary work and served on the San Francisco Medical Cannabis Task Force. Hunter relocated to Washington, DC in late 2012 to work as ASA’s National Field Coordinator. Hunter is committed to ASA’s efforts toward creating a more compassionate, sustainable drug policy, and he is proud to be a member of the country’s leading medical cannabis organization.