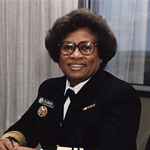 Minnie Joycelyn Elders (born Minnie Lee Jones; August 13, 1933) is an American pediatrician and public health administrator. She was a vice admiral in the Public Health Service Commissioned Corps and the first African American appointed as Surgeon General of the United States. Elders is best known for her frank discussion of her views on controversial issues such as drug legalization and distributing contraception in schools.[1] She was fired in December 1994 amidst controversy as a result of her views. She is currently a professor emerita of pediatrics at the University of Arkansas for Medical Sciences.