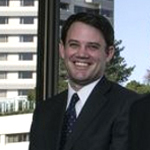 Michael Blue is Co-Founder of Privateer Holdings, Inc. In turn, he serves as the private equity’s Chief Financial Officer. He holds the same position for Privateer’s subsidiary company, Leafly, as well.

Blue Received his MBA from Yale School of Business in 2005 and became Vice President of de Visscher & Company – a private equity, investment banking, and consulting firm based in Connecticut. While there, he was tasked with the conducting valuation assessments of private and publicly traded companies alike.

In 2006, Blue joined Herrington, Inc. and headed a great deal of business ventures for the venture capital and development firm. He served as Principal before co-founding Privateer Holdings with Brendan Kennedy in 2011.

Privateer Holdings Inc.
CFO
Founded in 2011, Privateer claims to be the first private equity firm that only invests in cannabis-related companies. Because cannabis cultivation and distribution is federally illegal, their true focus is on ancillary businesses – companies that don’t “touch the leaf.” Privateer Holdings is led by Brendan Kennedy (CEO), Michael Blue (CFO), and Christian Groh (COO). They initially set a goal to raise $7 million dollars of funding, which they announced was met July 2013. Privateer acquired Leafly in 2012 and launched Arbormain, a Washington-based “start-up accelerator,” the following year.
Arbormain
CFO
Arbormain is a company based in the State of Washington. It is a subsidiary of Privateer Holdings that was created to act as a “start-up accelerator” for the cannabis industry, according to CEO Brendan Kennedy. It was founded in 2013. Arbormain leases large, I-502 compliant facilities with industrial infrastructure to support cannabis cultivation, testing and processing. They plan to open as many as five facilities throughout Washington State.