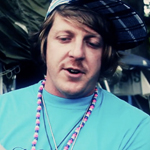 Ryan “Ruga” Connoly is the CEO of Grassroots California, a Colorado-based apparel company. He is also Founder of the 710 Cup. Formerly, he worked in real estate finance after graduating from the University of Colorado.

During his time in real estate, Connoly realized that a lot of his colleagues were profiting on the legal cannabis movement by leasing buildings for dispensaries and warehouses for cultivation. He had previously become a medical marijuana patient after suffering a surfing injury that fractured his skull in three places In turn, he wanted to help spread the word of cannabis and its medicinal benefits.

After receiving his commission from an $11 million real estate deal, Connoly set out to film a documentary on the emerging California cannabis scene. He soon began making hats to raise awareness and fund the project. From there Grassroots California was born.

Grassroots California
CEO
Grassroots California is a progressive clothing line that is based in Denver, CO. Founded in 2008, Grassroots donates a portion of every sale to a number of charities. Their specialty is making custom hats and they often collaborate with events, companies, and artists to create one-of-a-kind fitted hats. What truly makes Grassroots unique is that the inside of every hat is a different design that is often chosen by the collaborator. In 2013, Grassroots California combined forces with Hitman Glass to hold the first annual 710 Cup.