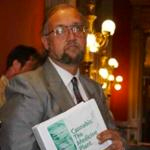 Timothy Tipton is the Chief Visionary Officer (CVO) of the Phoenix Tears Foundation, and Executive Producer of the Run from the Cure 2 documentary. Further, he is the host of the COLORADO WE CANnabis RADIO show, a member of the Compassionate Coalition national board of directors, and the founder of the Rocky Mountain Caregivers Cooperative in Colorado.

Formerly, Mr. Tipton was a court-appointed appeal bond supervisor in Larimer County, Colorado. He was also an instructor at the Cannabis Therapy Institute at one time as well.