Toffee Turtles: A Gourmet, Handcrafted Medible For Daytime Use

Despite the prevalence of medicated edibles, a variety of gourmet options can be hard to come by at most collectives. While Toffee Turtles line of edibles won’t replace the medicated brownies and cookies we’ve come to know and love, they certainly address an obvious need. Patients who want a gourmet edible experience need not to look any further.

The company’s namesake product, Toffee Turtles, comes in two varieties. There is a variation that contains 25mg of THC, as well as one with 40mg. In fact, the product is available without any medication and was originally sold as a seasonal item at Whole Foods.

When making Toffee Turtles, they use infused organic coconut oil, premium organic butter, and flour to make a French butter cookie base. The cookie is then topped with a dallop of caramel, covered in chocolate, and finished with a sprinkling of toffee chunks. The snack was crafted beautifully, but many patients don’t know what to expect before biting in to it. From the exterior it simply looks like a chocolate candy with toffee.

In most cases, I avoid indulging in edibles during the day; more often than not, they put me to sleep. With that being said, I found myself reaching for Toffee Turtles earlier in the day than other products for a number of reasons.

As far as taste goes, the Toffee Turtles hit the nail right on the head. The European chocolate was the most noticeable ingredient, and the hashy, ganja taste I get from a lot of edibles was non-existent. Even though I’m not the biggest fan of caramel, I really enjoyed the gooey layer covering the cookie.

“Within 20 minutes I could feel the tension in my back, shoulders start to relax and my anxiety fade.”

In addition to the taste, Toffee Turtles delivered rapid relief for my anxiety. Eating them before leaving the house worked perfectly. Within 20 minutes I could feel the tension in my back, shoulders start to relax and my anxiety fade. Personally, I had the best results when eating 1.5 Toffee Turtles, but I always tell my friends to start with just one. In either case, the effects lasted about 3 hours.

One aspect that differentiates Toffee Turtles from other products is the potency. 40mg of THC is a pretty low number when you consider other edibles. The lower dose certainly serves a purpose, and I love that I can enjoy one during the day. However, it may be hard for patients with a high tolerance to justify spending the same amount of money on an edible with 40mg of THC if they can find one with 420mg at the same price point.

Toffee Turtles Are Ideal For The True Connoisseur

It stands to reason that Toffee Turtles gourmet edibles are more costly than the typical selection. They are among the first whole food edibles and lab test all of their products. They are a member of The Werc Shop‘s Cannabaceutical Program, which regularly tests the potency and quality of each ingredient.

The emphasis placed on cannabinoid testing and natural ingredients is a positive step for the medicated edible industry. Toffee Turtles are a seasonal treat, and the flavor/strain profile changes each season. The founding patient of Toffee Turtles, Todd Shapiro, urges you to try this season’s selection while you still can. They’re available at VFL Collective in North Hollywood and CCSC Melrose in West Hollywood. 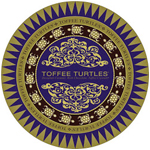