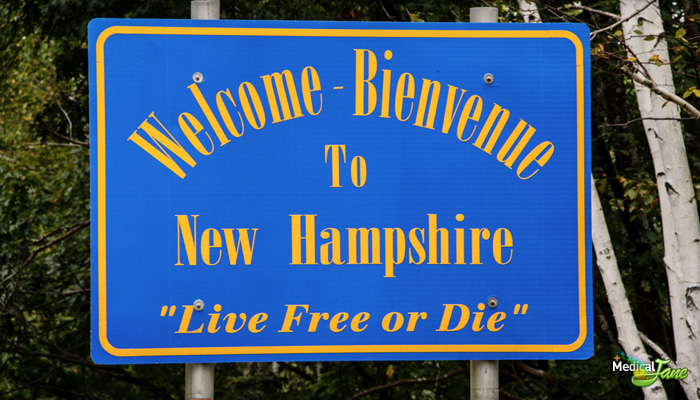 New Hampshire could be the next state to legalize the use and possession of cannabis by patients with cancer or other specified conditions.

The Republican-led Senate approved HB 573 last Thursday in an 18-6 vote, bringing the state one step closer to becoming the 19th state to do so (Illinois is in the race as well). This will be the third time in four years that NH has passed medical marijuana bills.

Former Governor John Lynch vetoed the two previous bills, but current Governor Maggie Hassan is expected to sign the new bill pending its approval by the House. She stated that she supports the legalization of medical marijuana, but threatened to veto the bill earlier this month because of a provision allowing patients to cultivate 3 plants for themselves under certain circumstances.

The Senate gave way to the Governor’s demands and removed the home-grow provision to make cannabis only available at state-licensed dispensaries, or ‘alternative treatment centers’. This is of particular concern to many patients, who have been urging members of the conference committee to recognize the importance of patient cultivation.

“This law will not make New Hampshire a California, Colorado or Washington state. The restrictions in this bill will help ensure that this is a New Hampshire law that helps New Hampshire Patients.”-Sen. John Reagan

Rep. Ted Wright (R-Moultonborough) took the stand at a House hearing in March and testified in favor of patient cultivation. Wright’s spouse is currently battling cancer, and cannot afford the $400 per month dispensary bills on top of the ever-mounting medical bills. He said that he hoped to be able to grow plants at home instead.

The rewritten version of the bill also removed post-traumatic stress disorder from the approved conditions, decreases the number of state-sanctioned dispensaries from 5 to 4, and requires a person to have been a patient of the prescribing doctor for no less than 90 days. That person must’ve also tried other remedies first and exhibit specified symptoms. Once a patient has been approved for use of medical marijuana, he or she may possess up to 2 ounces of cannabis.

“This law will not make New Hampshire a California, Colorado or Washington state. The restrictions in this bill will help ensure that this is a New Hampshire law that helps New Hampshire Patients,” said Sen. John Reagan (R-Deerfield).