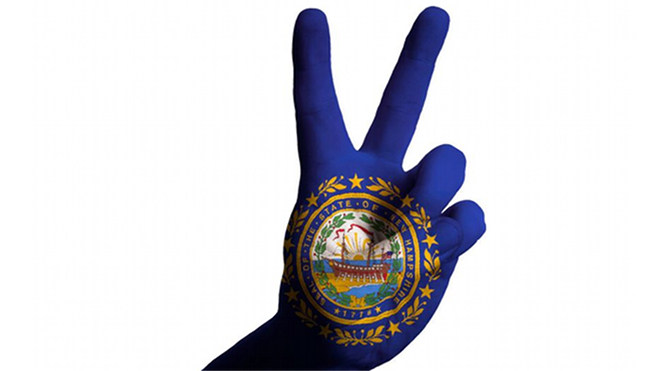 New Hampshire Gov. Maggie Hassan officially signed a medical marijuana bill into law Tuesday making state the 19th to do so in the country.

The bill, HB 573, was approved by the state Senate back in May, bringing the state one step closer to being the last state in New England to approve a medical marijuana law.

The new law, which took effect with the governor’s signature, allows patients with cancer and other qualifying conditions to possess up to two ounces of cannabis from nonprofit alternative treatment centers.

Matt Simon, a New Hampshire legislative analyst for the Marijuana Policy Project, praised the Governor for signing, but stated that the legislation is long overdue. “Those suffering from debilitating conditions like cancer and multiple sclerosis deserve legal, safe, and reliable access to medical marijuana,” said Simon.

According to the Associated Press, it could take up to two years to get the program going, though the law took effect yesterday when the bill was signed by Hassan.

This has angered many patients who are currently struggling from debilitating conditions like cancer and multiple sclerosis. Mainly because they lack the option to grow it themselves.

In the compromise bill that was passed last month in the Senate, the option for patients to grow their own cannabis at home was eliminated. The Governor threatened to veto the bill in early May because of a provision allowing patients to cultivate 3 plants for themselves under certain conditions.

The Senate gave way to the Governor’s demands and under current law, up to four dispensaries may be licensed statewide that may each grow a maximum of 80 cannabis plants, 160 seedlings, and possess 80 ounces of cannabis (or 3 mature plants, 12 seedlings and 6 ounces per patient they serve).

Additionally, to qualify for medical cannabis, a New Hampshire resident must be a patient of a doctor for at least 90 days, have tried other remedies, and exhibit certain symptoms typical of the defined qualifying conditions.

“Allowing doctors to provide relief to patients through the use of appropriately regulated and dispensed medical marijuana is the compassionate and right policy for the state of New Hampshire, and this legislation ensures that we approach this policy in the right way with measures to prevent abuse,” said Gov. Maggie Hassan after signing the bill yesterday.