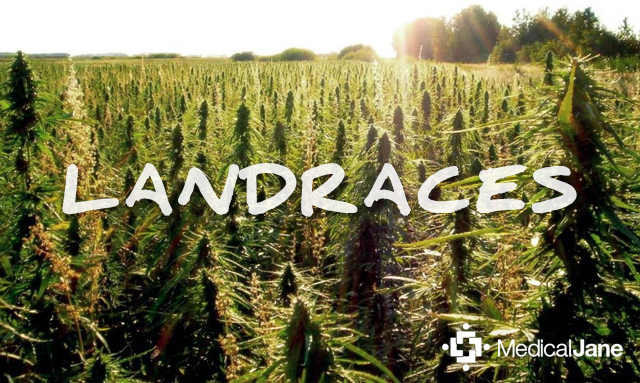 Landraces of Cannabis: What You Need To Know

The cannabis plant is thought to have originated in central Asia and has spread to the edges of the world over centuries. Its ability to adapt to new environments, spread its genetics, and change its characteristics, rivals the ability of human beings. It’s because of this, with a little help from master growers across the world, that we now have thousands of Cannabis strains with unique combinations of genetics.

“Some landraces have preserved themselves, isolated in remote areas of the planet with no contact with other cannabis strains for long periods of time.”— Franco, Strain Hunters

As naturally growing cannabis spread throughout the middle east from the Asian subcontinent, some of these gene pools stabilized themselves through a process of inbreeding and created what are considered ‘landraces’.

A single definition of landrace can sometimes be hard to come by, but it generally refers to a strain that was never bred systematically. Instead, after years of isolation and inbreeding, the plants begin to exhibit the same characteristics.

When a landrace strain is developing, there is no sudden influx of genetics through hybridization. Because of this, the strain is able to take on the traits best suited for the specific area in which it develops. This doesn’t necessarily make them superior to hybridized strains, but the characteristics tend to be very unique.

The “Hippie Trail” was an overland journey spanning from Turkey to India. At its peak, Cannabis enthusiasts flocked the area and eventually returned with seeds of their favorite strains and stories for a lifetime.

Though this uniqueness doesn’t necessarily translate to quality, landracestrains offer patients a rare & exciting medicating experience. For many older patients, smoking a joint of a landrace strain such as Alcapolco Gold, or Malawi Gold, brings them back to the good old days. In the past, connoisseurs traveled the world in great numbers in search of the best Cannabis they could find.

Most notably, Westerners from all-over embarked on a journey across the ‘Hippie Trail‘, where they enjoyed some of the best Cannabis the world has to offer in countries such as Lebanon, Kashmir, Afghanistan, and Manali. Many of these westerners returned home with genetics from the far east to mix with landrace strains from their region; and now here we are today, with thousands of cross-breeds all originating from the few original strains from India & Asia.

Genetics Are Preserved In Landrace Strains

Globalization and the ability of Cannabis to adapt to its environment has created the perfect storm for hybrid strains to develop. Often, strains are intentionally cross-bred in order to spur a completely new strain. This process allows breeders to select and focus on breeding whatever characteristics they wish to keep around. As a matter of fact, selective breeding is what has led to the rebirth of CBD-rich strains.

In theory, there’s no problem with this selective breeding, and it can be very beneficial in most circumstances. However, real samples of landrace strains are becoming more and more difficult to find. When you take Malawi Gold out of Malawi and try to grow it in northern California, it will lose some of its original characteristics. Without complete isolation in their home in Malawi the plants are forced to adapt to the introduction of new growing conditions. Naturally, the plant will grow differently and take on new characteristics.

It could take generations before the plant stabilizes these new characteristics and finds equilibrium in its new environment.

When all is said and done, the strain that you are left with may not resemble Malawi Gold at all. Instead, it is now considered a “phenotype” of Malawi Gold, which is what you will typically find now-a-days unless you are in Malawi where the strain grows in isolation in the wild.

As of late, a rekindling of landrace strains has become a mission of many breeders and enthusiasts alike. A movement is underway in which a number of breeders have gone in search of these classic strains in their natural habitats. In fact, Green House Seeds even went as far as to start their YouTube series, Strain Hunters, based completely around the idea.

The series of YouTube documentaries follows them traveling around the world searching for the most legendary landrace genetics to add to their collection. The videos do a great job of showing the lengths one must go to in order to maintaining the pure genetics of a landrace strain.

Some Landrace Strains You Should Know

Thai (Sativa) is a landrace strain from Thailand. It rose to popularity around the 1960’s and has been an incredibly popular strain to hybridize ever since. The original strain has a tendency to create hermaphrodites so it can be difficult to get a true female. The Sativa-like high it causes is very uplifting.

Panama Red strain is another classic Sativa strain that was an icon in the 1960’s. It had a long run as one of the most sought-after strains thanks to its psychedelic qualities and the smooth smoke it provides. Today, it can be hard to come by for two reasons; the plants aren’t ideal for commercial growing and the genetics can only be traced to one remote Panamanian island.

“The high of the Afghan cannabis is very physical, stoned, relaxing, and somewhat heavy on the legs; for people used to smoke sativas, it borders the numbing-narcotic side of cannabis.” — Franco, Strain Hunters

The Afghani Indica strain is an extremely important landrace today. There are a number of different phenotypes, but they are considered a Landrace because they share a common flavor, smell, and a number of other plant traits. Because of the strain’s short flowering time it is often cross-bred with Sativa strains make them better suited for commercial growing.

The Durban Poison strain is an incredibly potent Sativa Landrace from South Africa. Its stems from the Durban region, which is the country’s second largest manufacturer behind Johannesburg. This strain is extremely fruity and causes a cerebral, uplifting high.

The Punto Rojo strain is another Sativa Landrace. It stems from Colombia and is considered to be even better than the popular Columbian Gold strain. It has the scent of a fresh mango and provides a long-lasting, psychedlic high. Attempts to grow this strain elsewhere have proven difficult; the Colombian combination of soil and sun seems to bring out the desired terpenoids.

These are only a few of the landrace strains known to the Cannabis community today. Anywhere Cannabis is allowed to grow freely, without selective breeding, a Landrace can occur. It is important we make an effort to preserve these unique strains and their pure genetics.