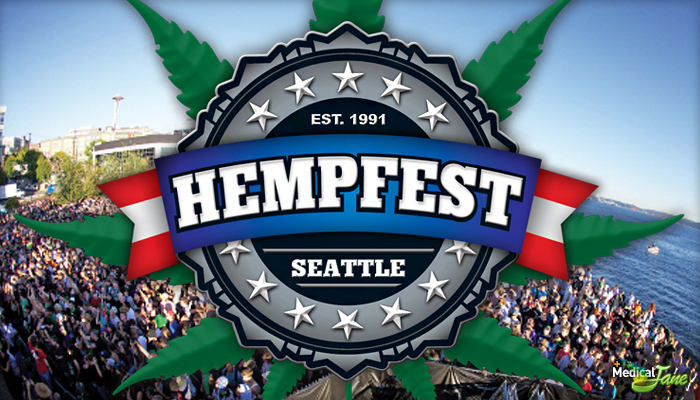 This year will be Seattle Hempfest’s 22nd Anniversary as the world’s largest annual cannabis protest rally.

Seattle Hempfest is held each year during the third weekend in August, and is free to the public! However, since it costs over $750,000 to produce the event each year, donations are much appreciated and go towards keeping the event alive.

The purpose of Hempfest is to raise awareness about cannabis and educate the public on the vast number of potential benefits offered by the plant. This extends beyond the medicinal applications to include the industrial, agricultural, economic, and environmental benefits that could be had from legalization.

The event is held across three waterfront parks: Centennial Park, Myrtle Edwards Park, and Olympic Sculpture Park. There are no addresses for these parks, but the official address of the event is 3130 Alaskan Way West, Seattle. Don’t try to mail anything there, it’s a park!

“The purpose of Hempfest is to raise awareness about cannabis and educate the public on the vast number of potential benefits offered by the plant.”

The event will feature six stages full of music & speakers, plus hundreds of booths that will be selling food, displaying arts and crafts, and much more. Cannabis activists that will be speaking on the main stage at the event include the founder of NORML, Keith Stroup, Steve & Andrew DeAngelo, Jorge Cervantes, Michael Krawitzof Veterans for Medical Cannabis Access (VCMA), Radical Russ of the Russ Belville Show on 420radio.org, Jodie Emery, and Danny Danko of HIGH TIMES.

The three-day event will start this Friday at 12 noon and the park closes each day at 8 pm. On Saturday and Sunday, the event starts at 10 am instead of noon.

Hempfest supports the lawful use of cannabis at the event, but sales of all illegal substances are unlawful including cannabis infused foods (edibles).

If you would like to volunteer to help set up and take down Hempfest, you can attend the event that way as well! You can have your choice from 80 different crews, and can choose your own shifts. Hempfest is still accepting applications on their website.

Seattle Hempfest started out in 1991 as a small gathering of stoners, and since has developed into one of the most trailblazing cannabis policy reform events in the world. Don’t miss your chance to come out and support national law reform this weekend!

For directions on how to get to Hempfest, where to stay, and more rules & regulations, visit their website at Hempfest.org.