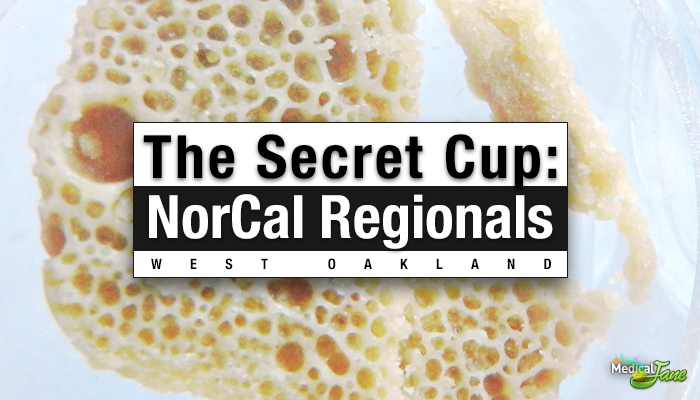 The Secret Cup: NorCal Regionals Are This Week In West Oakland

As we explained prior to the Secret Cup: Pacific Northwest regional, the contest has adopted a new, tournament-style format. According to Daniel de Sailles, the Secret Cup founder, the idea for a national concentrate competition judged by the competitors themselves got its start in San Jose. The first Secret Cup in Denver joined forces with Nikka T‘s Harvest Fest, which allowed for a number of entries from out of town.

The success of the first Secret Cup led to an apparent interest in taking it to other cities. As a result, Daniel set plans in motion to take the competition to “the biggest scenes” in the industry. So far, two competitions (Southern California and Pacific Northwest) have each named 3 regional winners, who will be invited to the finals. This week in West Oakland, Northern California extract artists will crown their Secret Cup representatives.

Following tradition, there will be a number of festivities surrounding the Northern California regionals. The location of the Secret House won’t be revealed until Thursday, when VIP ticket-holders will be contacted via email, text message, etc — hence the name, “Secret Cup”. When judging begins on Friday, VIP will join the competitors for a private dinner and get a chance to try the entries for themselves.

“The Secret Cup pre-party will be at a fully permitted venue and is scheduled to last until 5am.”

After a few hours at the secret house, shuttles will arrive to take people to the underground pre-party hosted by Irie Cartel. The party’s location will not be disclosed until Friday, but pre-sale tickets are available and recommended. They cost $20 and grouped tickets — to attend the pre-party AND the Secret Cup awards expo on Saturday — are also available for $35.

The Secret Cup pre-party will be at a fully permitted venue and is set to last until 5am. In addition to scheduled performances from Kursk, Gantz, Starkey, Thelum, Quantum Soul, and the Irie Cartel DJs, there will be a special dab lounge as well.

The Secret Cup Awards Expo: This Weekend In West Oakland

The Secret Cup winners will be announced on Saturday at the awards expo. According to Danny de Sailles, the event lost access to the ideal location just a week before the competition due to issues with the landlord. However, they found a more-than-viable replacement and the Secret Cup: NorCal Awards Expo will be held at the Base 6 Gallery in West Oakland.

“The Secret Cup Facebook event page is the best way to keep up to date on all Secret Cup happenings.”

The party starts at 2PM and is sponsored by Steep Hill Lab, Rump Wax, The Great Glob Society, and Irie Care Collective. In addition to the award announcements and dab lounges, there will be music throughout the night, including performances by Highdro, Aaron Evans, Johnny 5, Nebakaneza, and Mr.Kitt.

Like the pre-party, there are Secret Cup ticketsavailable for pre-sale online. Although the VIP tickets ($250) are much more expensive than general admission to both events ($35), they could be well-worth the investment. The VIP package includes: a gift bag, 2 tickets to the private dinner on Friday, 2 tickets to the Irie Cartel pre-party Friday night, and VIP-area-access for 2 during the awards expo on Saturday.

The Secret Cup Facebook event page is the best way to keep up to date on all Secret Cup happenings. Pictures of the entries will likely be posted online after they are lab-tested, and the test resultsare typically posted when the winners are announced. In the meantime, it’s a good source of useful information. As I was writing this, Rump Waxmade a post stating all VIP ticket-holders will receive a half gram of premium King Jack concentrate – that certainly could help justify splurging on that VIP package.