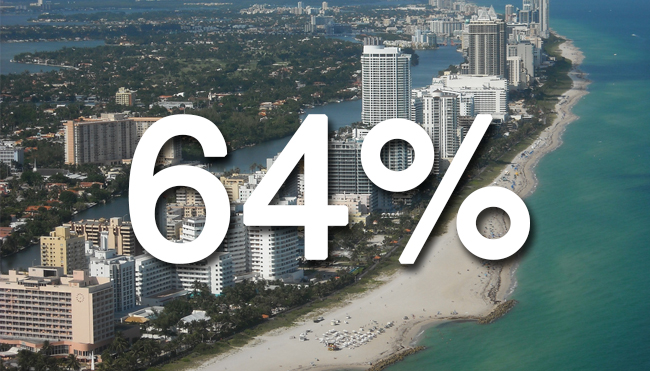 Citizens across the nation hit the polls Tuesday to decide on a number of hot-button topics, and the 2013 election season was a success for supporters of cannabis policy reform.

“6,683 (64%) of Tuesday’s [Miami Beach] voters are in favor of medical marijuana legislation in Florida.”

A form of decriminalization was approved by voters in Portland, Maine and three Michigan cities. Furthermore, Colorado voters approved Proposition AA, which outlines a statewide excise tax on recreational cannabis sales in the state.

The events in Colorado, Michigan, and Maine have garnered much of the media attention from Tuesday’s election results. However, voters in Miami Beach made their position on medical marijuana in Florida known as well, albeit in the form of a straw poll.

According to its results, 6,683 (64%) of Tuesday’s voters are in favor of medical marijuana legislation in Florida. Interestingly, its support surpassed that of the leading Mayoral candidate, Phillip Levine, by about 1,000 votes. Of course, the poll results are non-binding. Instead, they call on the city to push legislators for cannabis policy reform.

What Do Tuesday’s Poll Results Mean For Florida?

People United for Medical Marijuana (PUFMM), a group heading the push for statewide medical marijuana legislation, hope the results reflect the opinions of voters throughout the state.

“It speaks pretty positively to our chances next November,” PUFMM Treasurer Ben Pollara told the Miami Herald. “This was a very low turnout election in Miami Beach, it’s a relatively old electorate, and yet it still got close to 65 percent of the vote.”

“This was a very low turnout election in Miami Beach, it’s a relatively old electorate, and yet it still got close to 65 percent of the vote.” – Ben Pollara

On the other hand, opponents point towards the low voter turnout (25%), as well as well Miami Beach’s tendency to lean left on policy issues, as a detriment to the poll’s credibility. Additionally, a number of Republican Florida legislators, like Attorney General Pam Bondi and Governor Rick Scott, oppose the current proposition for medical marijuana in the state, claiming its wording would make it too easy to obtain a doctor’s recommendation.

Accordingly, Bondi will be joined in the Florida Supreme Court by Senate President Don Gaetz (R) and House Speaker Will Weatherford (R) on Dec. 5 when she will make an appeal to throw out the PUFMM-backed petition, which calls for a popular vote on medical marijuana legislation

To date, the People United for Medical Marijuana petition is said have garnered more than 200,000 signatures, 110,000 of which have been verified. Barring the measure being thrown out in court, the group must collect 683,149 verified signatures by February. If successful, an initiative to legalize medical marijuana in Florida would be placed on the November 2014 ballot.

Floridians may find the petition at www.UnitedForCare.org