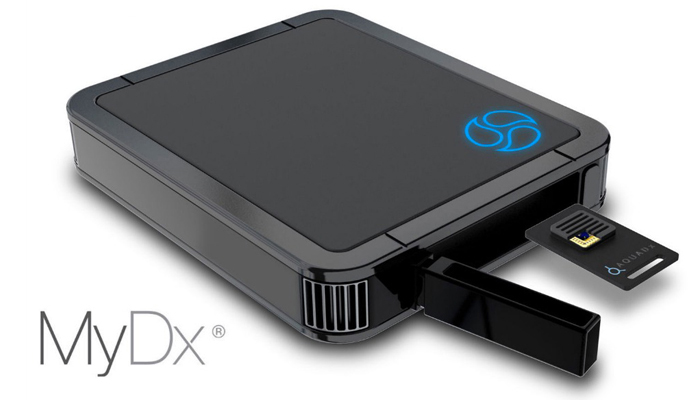 Earlier this month,CDx Life– a startup based just outside of San Diego – announced the creation of the MyDx – “the world’s first pocket-sized testing lab.” In turn, they have launched a crowdfunding campaign on IndieGoGo.comwith an initial goal of raising $100,000.

To explain, the MyDx will fit in the palm of your hands, while possessing the ability to perform as a gas chromatography lab testing device. It will allow users to analyze the contents of any organic sample and send the test results to your phone within seconds.

Originally designed to accommodate medical marijuana patients, the MyDx will be accompanied by a “cannabis sensor,” – aka CannaDx – which stands to determine which strain of cannabis is being testing.

“The MyDx will allow users to analyze the contents of any organic sample and send the test results to your phone within minutes.”

In order to do so, it will perform a terpene analysis similar to those conducted by third-party testing labs like Steep Hill Halent (California), Cann Labs (Colorado), The Werc Shop (California), and Northwest Botanical Analysis (Washington). In doing so, the MyDx will use its test results to provide a “basic fingerprint” of each strain.

Meanwhile, the CannaDx will quantify the levels of tetrahydrocannabinol (THC) and cannabidiol (CBD) also.

With that said, a representative from CDx Life insists that they are not trying to step on the toes of testing labs. Instead, they hope to empower people – manufacturers, distributors, consumers and regulators – to do their own analysis. Accordingly, the MyDx aims to help the public “test for the safety and potency of cannabis.”

Once results are obtained, they will be sent to the user’s cell phone by means of the MyDx cannabis app, which will provide additional information about the strain. Furthermore, each person will be able to keep a record of strains they tested in the past and rate its effectiveness for their individual needs. Here is a list of more features that they plan on offering:

In order to aid in sensor development and overall production costs, CDx Life launched an IndieGoGo crowdfunding campaign earlier this week. As stated above, their initial goal is to raise $100,000. Those who make a contribution of $199 ($200 less than the projected retail) will the first to receive the MyDx before it hits the market.

More information about the MyDx and how to make a contribution can be found on the MyDx IndieGoGo page.