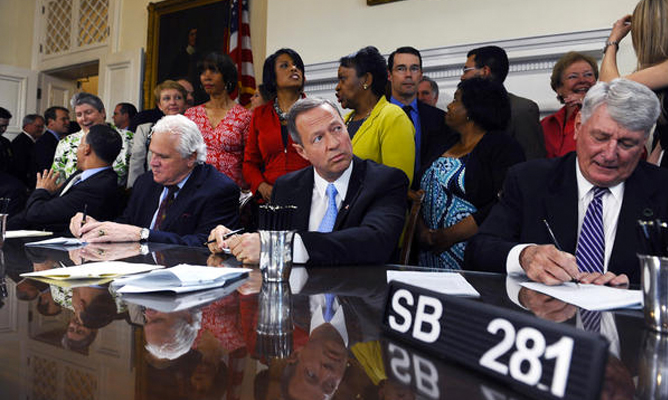 ANNAPOLIS, MD – Maryland officially became the 21st state to allow medicinal marijuana on Monday. Further, it became the 18th state in the country to decriminalize the possession of small amounts of cannabis, despite its rough path to approval earlier this month.

Maryland Governor Martin O’Malley approved Senate Bill 364 (SB 364), making possession for those caught with less than 10 grams of cannabis a civil offense punishable by a fine of up to $100. This move has made Maryland the 18th state to decriminalize small amounts of possession and eliminating previous criminal penalties for possessing cannabis.

With the new bill, the fines increase with each offense as a fine of up to $250 will be issued for a second offense, and up to $500 will be issued for subsequent offenses. Those aged under 21 years of age and are third-time offenders will be ordered to a clinical assessment for substance abuse disorder and attend a drug education program.

“Maryland has taken a step in the right direction, but there is still work to be done. Adults should not be punished for making the safer choice to use marijuana instead of alcohol, if that is what they prefer.” – Rachelle Young

Rachelle Yeung, legislative analyst for the Marijuana Policy Project (MPP), shared her opinions for the importance of O’Malley’s signature on SB 364.

“People should not be subjected to potentially life-altering criminal penalties simply for possessing a substance that is safer than alcohol,” Yeung stated. “Maryland has taken a step in the right direction, but there is still work to be done. Adults should not be punished for making the safer choice to use marijuana instead of alcohol, if that is what they prefer.”

SB 364 will officially go into effect on October 1 of this year, and will become another stepping stone for supporters who are trying to get rid of strict cannabis possession laws altogether throughout the country.

“Maryland’s medical marijuana law will at long last provide patients with needed protection from arrest and prosecution, and give them a means to safely and legally obtain medical marijuana.” – Mike Liszewski

“We’re excited to welcome Maryland as the 21st medical marijuana state,” stated Mike Liszewski, the Policy Director with Americans for Safe Access (ASA). “Maryland’s medical marijuana law will at long last provide patients with needed protection from arrest and prosecution, and give them a means to safely and legally obtain medical marijuana.”

Earlier this month, HB 881 passed with flying colors as the Maryland House of Delegates voted 125-11 in favor of the bill last week. Patients with severe pain, severe muscle spasms, nausea, wasting syndrome, seizures, and other ailments will be protected under the bill.

Yeung expressed her approval of the newly approved medical marijuana bills: “This law is long overdue and comes as a relief to the many seriously ill patients throughout Maryland who will benefit from safe access to medical marijuana,” she stated.

The medical marijuana bills will be implemented officially on June 1. Supporters have praised O’Malley for stepping up for Maryland patients and also for residents who are caught with small possessions of cannabis. Supporters hope that Maryland can move a step closer to fully legalizing the plant in the near future, which may not be too far from reality. A poll conducted by the American Civil Liberties Union (ACLU) and MPP back in the fall of 2013 showed 53% of Maryland residents polled were in favor of regulating and taxing cannabis similarly to alcohol, while 38% were in opposition to it.

“It’s time for legislators to take a long, hard look at replacing marijuana prohibition with a system in which marijuana is regulated and taxed,” Yeung said. “Marijuana should be sold by licensed businesses, not criminals in the underground market.”