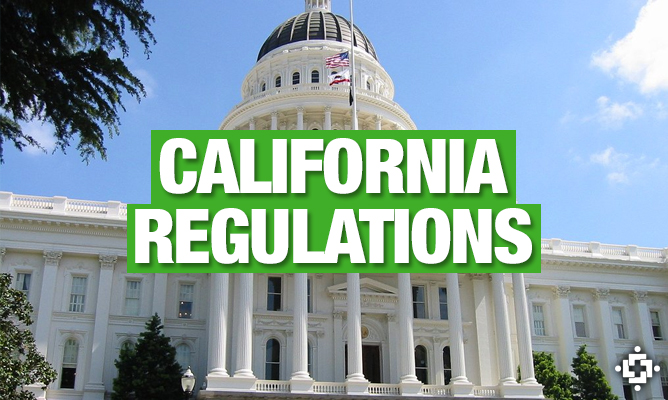 SACRAMENTO, CA — Two bills out of California attempt to regulate the medical marijuana industry – a trade that has been referred to as the “Wild West” of its time. Many cannabis businesses in California have gone, since the start, without a benchmark or standard to follow, nor a regulatory agency to oversee performance.

SB 1262, a bill introduced by Senator Lou Correra (D) and sponsored by the California Police Chiefs association and the League of California Cities. Within this proposal, businesses will be required to acquire adequate security measures to protect themselves from theft. This bill also will prohibit misleading advertisements regarding physician recommendations.

“Within this proposal, businesses will be required to acquire adequate security measures to protect themselves from theft.”

However, there were other provisions initially introduced with this bill that caused concerns.

One clause being that no physician could recommend butane hash oil (BHO) to be dispensed as medicine. Although this particular clause has since been stricken, it begs the question of the bill’s original intention.

“Not much of [SB 1262] is left,” Sean Donohoe, Deputy Director of the California Cannabis Industry Association, explains. “It’s an open bill, ready to move forward, indicating a commitment on the part of the sponsors as well as on the part of the bill author. But we want to address the problem this year, with reasonable regulations that are going to work.”

AB 1894: Verify And License The Industry

Adjacent to the senate bill, AB 1894 was introduced by Assembly member Tom Ammiano (D). This bill will grant the ability to register and license various positions in the industry, as well as a 24-hour searchable database for law enforcement to access.

Sean Donahoe commends this idea, and hypothesizes a potential scenario as such:

“The proverbial problem is you got a cultivator and a transporter thats moving 300lbs [of cannabis] from Humboldt in Northern California to Los Angeles, and while they’re driving I-5, an officer pulls them over at 3 in the morning. The guy has some paperwork, his patient records, maybe even a bill of lading from the dispensary in L.A. But how is the officer, at 3 in the morning, supposed to know all of this is in order? All it looks like to him is some paperwork, and 300lbs of a controlled substance. So if we had state licenses, for the transporter as well as both the source and the destination, law enforcement could feel much better about this being a transaction that was abiding by applicable state regulations.”

Opposers have stated AB 1894 seeks to preempt and prohibit local government, forces communities to open cannabis facilities, and prohibits local governments from zoning or suspending licenses. However, Ammiano says each of these accusations are not true.

Glenn Backes of the Drug Policy Alliance recently spoke in favor of the AB 1894, calling it “a practical bill.” He goes on to say, “it’s enforceable, and it can be done without putting costly mandates on local governments.”

Be that as it may, the underlying problem that can not be agreed upon is the agency chosen to manage the medical cannabis market.

Who Will Conduct The Regulations Under AB 1894?

The California Department of Public Health (DPH) was the agency originally chosen For SB 1262. According to Donahoe and Ammiano, the Alcoholic Beverage Control (ABC) department wanted to take on the project of implementing regulations for the cannabis industry.

When asked about the why the Alcoholic Beverage Control was chosen, Sean Donahoe explains: “They are the most trusted, most experienced agency that is built and constantly addresses the problem of intoxicating substances getting to minors.”

On the other hand, John Lovell of the California Police Chief Association recently cited a situation where the ABC took four years to revoke a liquor license for a shop that reported 124 liquor related arrests. The League of California Cities agreed with his opposition, adding that the ABC is granted too much power in the bill’s language.

Accordingly, SB 1262 is set to be amended to eliminate the need for an entity all together. This stands to make all licensing (and enforcement) dependent on local ordinances and other regulations.

The amendments also are expected to include enhancements to protect counties that have any enacted bans. Supporters claim it can reduce state cost, and that it can be implemented for a fraction of what AB 1894 costs.

“We can hopefully standardize abiding by the rules.” – Sean Donahoe

Another point made by Donahoe was the importance of eliminating what legislators are calling, “bad actors”.

“The folks who are trying to be good can not compete with the folks who prefer to be bad,” Donahoe goes on, explaining “I want to move as many responsible operators over to the other side and get them licenses.” This way, he says, “we can hopefully standardize abiding by the rules.”