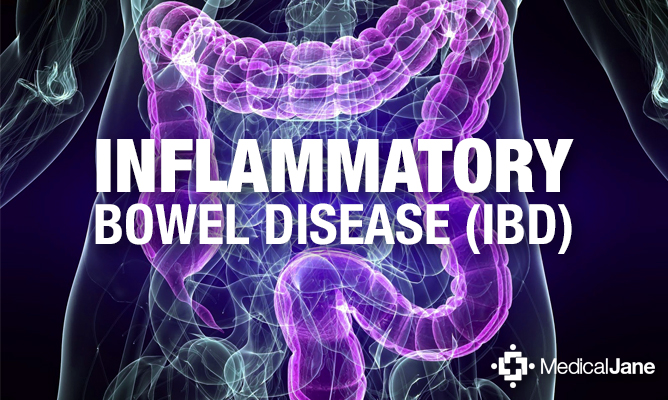 What Is Inflammatory Bowel Disease (IBD)?

Cannabinoid receptors (CB1 and CB2) are found in the nervous system, including the enteric nervous system (which assists in controlling gut function), and the endocannabinoid system (ECS) has been found essential to maintaining proper gut motility, sensation, and inflammation.

While few high-quality studies have been conducted on the impact of medical cannabis on patients with IBD, evidence is mounting that it may be a safe and effective treatment option for some patients.

“A 2011 study found that 51% of ulcerative colitis patients and 48% of Crohn’s disease patients are lifetime cannabis users.”

Finding optimal treatment for Inflammatory Bowel Disease is imperative, as these conditions can be intensely painful, and often cause abdominal discomfort, appetite loss, nausea/vomiting, and other related symptoms. They are therefore likely to cause a decreased quality of life for patients.

Treatment of Inflammatory Bowel Disease requires prevention of flare-ups, healing of the gastrointestinal tract where damage has occurred, and treatment of symptoms. Patients are reporting relief as a result of cannabis treatment.

A 2011 study found that 51% of ulcerative colitis patients and 48% of Crohn’s disease patients are lifetime cannabis users, with 33% of the UC lifetime users and 50% of the Crohn’s disease users having utilized medical marijuana for the treatment of symptoms.

Stimulation of CB1 and CB2 receptors in the central nervous system may also help to treat symptoms of IBD by reducing pain and nausea.

Results of an uncontrolled survey study published in Digestion found that three months of medical cannabis treatment for patients resulted in reports of weight gain and BMI – this is positive for patients with IBD, whose bouts of vomiting and diarrhea can result in malnutrition and weight loss. They also reported improved general health perception, social functioning, ability to work, physical pain, and depression, and a reduced disease activity index (signaling improvement in the condition).

“Patients in the medical cannabis group claimed to have improved sleep and appetite without significant harmful side effects.”

The purpose of the study was to see whether or not patients using medical cannabis were able to improve symptoms of their disease (i.e. put the condition into remission).

21 patients with Crohn’s disease were divided into two groups: an active treatment (i.e. medical cannabis) and control (placebo) group. Although more patients in the active treatment group than in the placebo group achieved complete remission, the result was not statistically significant, meaning that it’s possible that the difference may have occurred by chance.

How exactly does medical cannabis have this effect on the symptoms of IBD? The full story is not yet known, but a recent article in Pharmacology explains the basic mechanisms.

As mentioned, cannabinoid receptors are found in the nervous system, including the central, peripheral, and enteric components. Both CB1 and CB2 receptors are found in the cells lining the inner space of the colon (epithelium), with CB1 receptor activation tasked with preventing overstimulation of the intestinal movement and secretion which can be caused by excessive inflammation. It can therefore reduce the likelihood of diarrhea.

When CB2 receptors are activated, the amount of programmed cell death (apoptosis) increases for T-cells and the number of T-cells decreases. Additionally, fewer white blood cells, including T-cells, neutrophils, and macrophages, are called to the site of damage or potential damage. Therefore, damaging inflammation is reduced.

“There is evidence that THC may be helpful in reducing permeability of the epithelial lining, thus helping to reduce damage and decrease inflammation.”

When the epithelial lining of the GI tract becomes leaky (commonly known as “leaky gut“), it allows substances from the interior GI space, including bacteria, to travel into the surrounding tissues and find their way to other areas of the body, where they don’t belong. This can lead to overload of liver detoxification mechanisms and immune system issues, which can compromise normal and healthy body functions.

There is evidence that THC may be helpful in reducing permeability of the epithelial lining, thus helping to reduce damage and decrease inflammation.

While Naftali et al. used placebo cannabis with only the THC removed, cannabinoids other than THC, some of which work on non-cannabinoid receptors, also may prove beneficial in treatment of IBD symptoms. This may be a reason why the researchers were unable to achieve statistically significant remission between the active and placebo groups.

It is clear that the endocannabinoid system functions in maintaining gastrointestinal health and comfort. Understanding how the various cannabinoids work to stimulate receptors may prove effective in treating the symptoms of irritable bowel disease (IBD) both short-term and long-term.

Much more research is needed in this area in order to fully understand these processes. However, given the safety profile of medical cannabis and the basic knowledge we have on the endocannabinoid system’s effect on gastrointestinal function, patients who are not experiencing relief from standard treatments should speak with their healthcare providers about the possibility of adding medical cannabis to their treatment regimen.