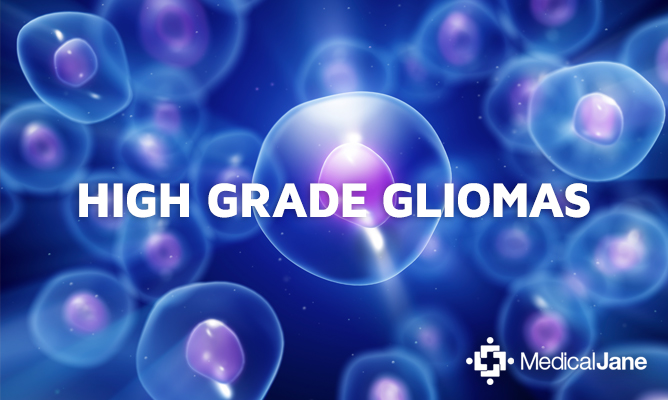 A study published in November 2014 in Molecular Cancer Therapeutics and conducted at St. George’s University of London’s Department of Oncology has found that the use of cannabinoids, specifically delta-9-tetrahydrocannabinol (THC) and cannabidiol (CBD), may be useful in treating high-grade gliomas, potentially slowing the disease’s progression.

What Are High Grade Gliomas?

Gliomas are a type of advanced brain cancer that are fast-growing, aggressive, and difficult to treat. Gliomas occur in the brain and spinal cord and result from the excessive proliferation of abnormal neuroglia, cells of the nervous system that are not directly involved in signaling (as opposed to neurons). Usually, neuroglia work in important, supportive roles to ensure that neurons are communicating properly and efficiently, and there are 3 neuroglia for every 1 neuron in the body. Types of gliomas include astrocytomas (the most frequent type), ependymomas (the most common glioma in children), and oligodendrogliomas.

There are benign gliomas (which do not invade brain tissue and can be removed if in certain locations, only producing symptoms if they begin to compress important surrounding structures) and malignant gliomas (which do invade brain tissue and have a worse prognosis, or an increased likelihood of shortened survival). So, while not all gliomas are malignant, 80% of malignant brain tumors are gliomas. In the United Kingdom, 1-year survival at diagnosis of a high grade glioma is 36%, and 5-year survival is 10%.

For glioblastoma multiforme, a particularly aggressive high grade glioma, the majority of patients diagnosed pass away within 1 year, and 5-year survival is only 6%. While surgery, radiation, and chemotherapy can be used in attempts to treat high grade gliomas, there are very few to no effective treatment options that increase patient survival, and finding ways to extend the lives of patients is desperately needed.

This is not the first time that a study has shown that cannabinoids may be useful as anticancer agents. According to the authors of the study, “Numerous reports highlighting potent activity in vitro [i.e. cells studied outside of the body] and in in vivo [i.e. cells studied inside the body] models have established it as a potential anticancer therapeutic agent in a number of cancer types through processes such as:

While the authors note that the psychoactive nature of THC has increased controversy in consideration of cancer treatment with its use,” a pilot trial of its therapeutic use in patients with glioblastoma multiforme (GBM), an advanced type of glioma, showed feasibility without any overt psychoactive effects.”

Additionally, CBD seems to work through similar mechanisms as THC in terms of anti-tumor effects, except it may not exert effects through receptor activation as frequently as THC, and it does not cause psychoactive effects. Further, THC demonstrates analgesic, anti-emetic, and anti-inflammatory properties, whereas CBD possesses anti-psychotic, anti-seizure, and anti-anxiety properties. Together, these cannabinoids (and many more) work together to create an entourage effect that is much more powerful than any single cannabinoid.

Results of the Current Cannabinoid Study

For the in-vitro portion of the study, the researchers evaluated the effects of THC and CBD on GBM and glioblastoma astrocytoma cells.

For the in-vivo portion of the study, the researchers evaluated the effects of THC and CBD on C57BL/6 mice with transplanted GL261 glioma tumors. 80% of mice who received transplants developed tumors, and the researchers found that radiation alone had no effect on glioma growth, while combined THC and CBD inhibited progression, and combined THC, CBD, and radiation inhibited progression the most.

According to the researchers, “…[T]hese data add further support to the concept that cannabinoids both alone and in combination with each other, possess anticancer properties.” Given this exciting new evidence, in conjunction with the previously existing evidence supporting the potential application of cannabinoids as antitumor/anticancer agents, increased research on the use of cannabinoids in treatment of not only high grade gliomas, but also other types of cancerous growths, is warranted and needed as soon as possible.

For information on how you can advocate to move cannabis out of the Schedule I controlled substance classification in order to increase research in the United States, expectations, and safety in considering whole-plant medical cannabis use, click here.