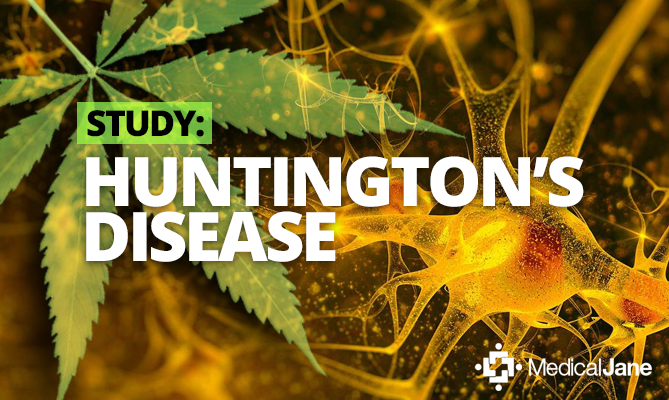 An Introduction to Huntington’s Disease

Huntington’s disease is a severely debilitating neurodegenerative disease caused by a genetic mutation. Although the exact mechanism is not fully known, the development of this mutated protein seems to lead to destruction of neurons in the basal ganglia, a part of the brain involved in movement regulation, and other areas. Patients with Huntington’s disease tend to experience significant dysfunction in movement, thought processing, and normal psychiatric functioning. Symptoms ordinarily begin in the 30s-40s, and patients usually pass away within 10 to 20 years of symptom onset.

Authors of a controlled animal study, recently published in the journal Neuropharmacology (online August 2014, in print February 2015), have found that long-term stimulation of cannabinoid receptors may prevent onset of movement/motor dysfunction symptoms that result from Huntington’s disease.

Researchers used post-adolescent R6/1 transgenic mice as models for Huntington’s Disease in humans, and administered a molecule that stimulates cannabinoid receptors (WIN 55,212-2, a cannabinoid receptor agonist) either (1) acutely: one time, at 12 weeks of age, 30 minutes before testing, or (2) chronically: daily, starting at 8 weeks of age and continuing until testing at 12 weeks of age. Testing included assessments of movement, social interaction, and ability to recognize characteristics of the surrounding environment (spatial recognition).

In contrast to “Huntington’s disease mice” who received either (1) no treatment with or (2) acute treatment with the cannabinoid receptor agonist, “Huntington’s disease mice” who received the agonist chronically displayed “full rescue” of motor function, meaning that no movement impairments were found. Additionally, researchers found that chronic administration prevented loss of neurons found in the area of the brain involved with movement coordination (known as the striatum) and also increased the amount of normal huntingtin protein found in the striatum. However, there were no improvements in social interaction or spatial recognition, perhaps due to the large amount of CB1 receptors or cannabinoid stimulation activity in the striatum as opposed to other areas. Mice who received acute administration of WIN 55,212-2 showed no improvements in motor dysfunction, social interaction or spatial recognition.

The researchers note that increasing the dose of WIN 55,212-2 in future studies may result in more impressive results, but also has the potential to decrease effects as a result of desensitization of cannabinoid receptors (i.e. receptors stop responding to cannabinoid agonists). It was also found that administration of WIN 55,212,-2 increased social withdrawal in both R6/1 mice (mice acting as models for humans with Huntington’s disease) and wild-type mice (mice without any abnormalities), which is a potential negative side effect of cannabinoid use, especially for patients with Huntington’s disease (who are prone to depression and suicide) and mental health disorders that increase social withdrawal, such as depression.