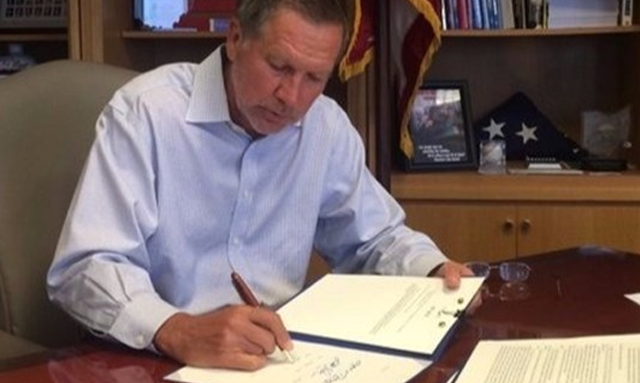 Governor John Kasich has signed into law a bill that will make Ohio the 25th medical marijuana state, although the new law is not as comprehensive as a now-defunct ballot proposal would have been.

Under the new law created by House Bill 523, home cultivation of cannabis and the smoking of medical marijuana remain prohibited — although whole plant cannabis will be available at dispensaries for vaporization purposes, making the “no smoking” limitations a policing quandary.

The bill was fast-tracked through both chambers of the Ohio legislature last month in a successful attempt by lawmakers to thwart efforts backed by the Marijuana Policy Project (MPP) to place a more comprehensive proposal before voters in November, which would have included allowances for home cultivation.

“The Republican establishment in Ohio explicitly and publicly said that they passed the bill in order to nullify the need for MPP to place our initiative on the November ballot.” – Rob Kampia of MPP

“The Republican establishment in Ohio explicitly and publicly said that they passed the bill in order to nullify the need for MPP to place our initiative on the November ballot,” Rob Kampia, Executive Director of the Marijuana Policy Project, wrote in an email to supporters on Thursday.

The MPP-backed Ohioans for Medical Marijuana announced shortly after the bill was sent to Kasich’s desk that they were suspending their efforts to place their measure before voters. In a statement issued Wednesday, the group called the new law a step forward, but emphasized there was still work to be done to improve the state’s new “imperfect” medical marijuana law.

“This is a joyous day for the thousands of Ohioans who will finally be able to safely access much-needed medicine,” said Ohioans for Medical Marijuana spokesman Aaron Marshall. “As we continue this movement to bring medical marijuana to all Buckeyes who need it, we will remember today as a huge step forward.”

“Congratulations to all the patients and advocates whose intense advocacy efforts helped to make this day into a reality,” Marshall continued. “We still have much work ahead of us to improve this imperfect law while holding state lawmakers and regulators to the promises contained in HB 523, but we are proud of the role that we played in getting this law enacted. We plan on working to better this program, utilizing our amendment as a roadmap for those improvements.”

How to Qualify as a Medical Marijuana Patient in Ohio

Lawmakers included troublesome, arbitrary limitations on the amount of tetrahydrocannabinol (THC) that medical marijuana products can contain. Plant material will be capped at 35% THC and extracts will be capped at 75% THC.

The new law will take effect in 90 days, but Ohio’s medical marijuana program isn’t expected to be fully implemented until early 2018.