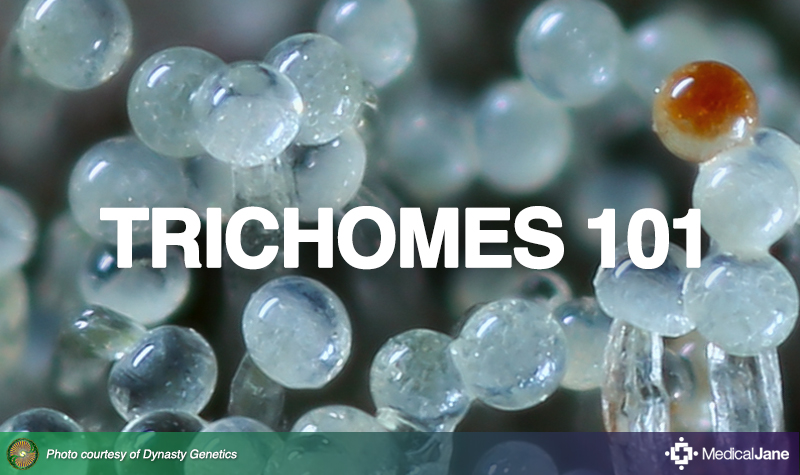 If you look closely at a healthy cannabis plant, then you will undoubtedly notice the many glistening translucent resin glands protruding from the buds. These resinous outgrowths are known as trichomes.

“In addition to housing the essential compounds of the Cannabis plant, trichomes play an important role in the survival of the plant.”

Trichomes house the key components of the plant that give it its therapeutic and psychotropic properties. These glandular structures are predominantly responsible for the biosynthesis of cannabinoids, the biologically active compounds unique to the Cannabis plant.

Barely visible to the naked eye, trichomes are better observed through magnification (at least 40x). But at close examination, you can see the trichomes protruding from the flowers and the small leaves that are interspersed among the flower clusters. The most abundant concentration of trichomes can be found on bracts of pistillate (female) plants. The pistillate flowers contain a greater density of glands than the leaves.

Trichomes should not be confused with the pistils on the flowers of a female plant. The pistils house the plant’s reproductive organs and are often covered with gooey resin. The pistils are fairly easy to distinguish as they are covered with lots of pistillate hairs. These wispy “plant hairs” typically begin white in color and slowly change in color to hues of oranges and reds as they age, and then to brown as they near death.

Plant trichomes come in a variety of shapes, sizes and cellular composition. Trichomes of the Cannabis plant have been divided into two types, namely glandular and non-glandular. These types of trichomes are distinguishable on the basis of their capacity to produce and secrete, or to store significant quantities of secondary metabolites.

Non-glandular trichomes are hair-like extensions resembling leaf hairs, with a slender pointed apex. They protect the plant from its environment, mainly through physical means (e.g., restricting access to animals and insects, preventing water losses or light degradation, and fungal infection). It is characteristic of cannabis to find non-glandular trichomes on both the top and bottom of leaves.

Non-glandular trichomes fall into one of two categories:

Glandular trichomes produce and store large amounts of cannabis resin. Female plants are particularly rich in glandular trichomes. These are mainly associated with the flower structures, but they can also be found on the underside of the leaves and occasionally on the stems of young plants.

Glandular trichomes fall into one of three categories:

To put the size of a trichome into perspective, a human hair is roughly 75 microns and a human red blood cell is approximately 5 microns.

The amount and dominant type of trichomes on any given Cannabis plant is partly genetic, but the formation of resin glands and the process that takes place inside them is heavily dependent on the genetics and the sum of all the environmental factors involved. A heavy trichome production may signify elevated potency level, but is not necessarily an indication of a potent plant. Starting with the right strain and employing good growing practices can make all the difference.

Trichomes play an important role in protecting the plant

In addition to housing the essential compounds of the Cannabis plant, trichomes play an important role in the survival of the plant.

The sticky resin surface provides a natural defense against fungus, insects, and predators such as herbivores that cannot penetrate the gooey barrier, or are deterred because they find the flavor and/or texture displeasing. In fact, THCA and CBGA have been shown to be toxic to certain insect species (Taura, et al., 2007).

Trichomes also reduce the heating effect of sunlight. The glandular resin heads bind UV rays, acting as a natural sunscreen, so that they do not harm the growing buds or cause mutations in the plant.

As an annual plant, cannabis has two growth periods: vegetative and flowering. In the vegetative stage, the plant grows rapidly and produces minimal amounts of medicinal compounds; whereas, in the flowering stage cannabinoid biosynthesis is accelerated, and reaches the highest level during the last few weeks of flowering. However, without more funded research, the exact details of cannabinoid production in the trichomes of a cannabis plant during bloom are still unclear.

By monitoring the change in color of the gland heads, a grower can evaluate the ripeness of flowering pistillate plants. In early to middle flowering, resin heads will be mostly clear; whereas, during the final phase of the bloom cycle, the trichomes will transition from clear to a cloudy, milky white color, and eventually to amber. Most seasoned growers say the time to harvest is when the bulbous heads are cloudy with a few amber ones here and there (about a 70/30 mix). Of course, there are many other factors that determine the best time to harvest, but the trichomes are a good litmus test to avoid harvesting too early or too late.

Floral clusters will be in different stages of maturity as cannabis grows because the plant keeps flowering and forms new buds all the time. New flowers actually grow on top of the old ones. This also means there are trichomes all over the plant that are in different stages of development. It is important to make sure that the bulk of the plant is ready before harvesting. One method some growers follow is to harvest just the top half of the plant and leave the bottom half flowering for another month or so, but others say it is not worth the effort.

Cannabis buds that have been carefully harvested, trimmed, and packaged by companies that are mindful of the protecting trichomes are arguably better smelling, tasting, and more effective than mishandled buds with compromised trichome structures.

The difference between trichomes and kief

Trichomes are very fragile structures. As such, the cannabis plant should be handled delicately throughout its entire life cycle. With slight agitation, trichomes can become brittle and break off from the cannabis plant, resulting in less overall cannabinoid and terpene content.

The accumulation of these broken/dying trichomes creates a fine, powdery substance referred to as kief (also written as keef or kif). The easiest way to collect kief is by using a 3-piece herb grinder. The chamber construction of the grinder allows the ground herb to be caught in the middle chamber as the trichomes continue to fall through a screen, collecting in the bottom of the grinder.

To collect larger amounts of kief, many people create makeshift sifters using layered screens similar to the ones pictured here. Using a sifter box and a coin, you can expedite the kief collection process by disturbing the trichomes enough to make many fall off.

There are 8 references in this article. Click here to view them all.