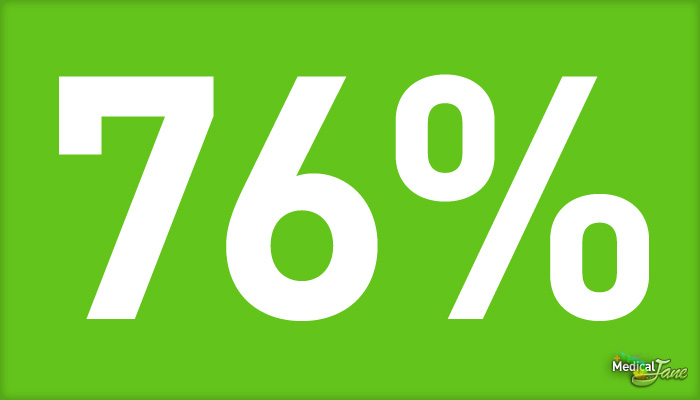 A recent poll in the New England Journal of Medicine found that 76% of doctors would recommend the use of medical marijuana.

The poll about the recommending of medicinal marijuana by physicians was conducted during a live debate that occurred on the New England Journal of Medicine (NEJM) website. Doctors were given a theoretical case study in which a 68-year-old woman has breast cancer metastatic to the lungs and the thoracic and lumbar spine. She is currently undergoing chemotherapy and reports having low energy, minimal appetite, and substantial pain in her spine. She has been taking 1000 mg of acetaminophen every 8 hours for the pain and sometimes she takes 5 or 10 mg of oxycodone at night to provide pain relief.

During an appointment with her primary care physician the woman, Marilyn, asks about using medical marijuana to help alleviate the nausea, pain, and fatigue. Since Marilyn lives in a state that has approved the use of medicinal marijuana for personal medicinal use, she tells the physician her family can grow the plants for her.

The poll concluded by saying, “As her physician, what advice would you offer with regard to the use of marijuana to alleviate her current symptoms? Do you believe that the overall medicinal benefits of marijuana outweigh the risks and potential harms? Which one of the following approaches do you find appropriate for this patient? Base your choice on the published literature, your clinical experience, recent guidelines, and other sources of information.”

The doctors were then given two choices:

A total of 1446 votes were cast from 72 countries (1063 came from the United States, Canada, and Mexico) and 56 states and provinces in North America, and 188 comments were posted.

Many of the doctors that commented in favor of medical marijuana cited personal experiences where their patients benefited from the use of cannabis to alleviate their pain. Others stated that the patient has a choice and it is their responsibility as caregivers to alleviate suffering, and reiterated the known dangers of prescription narcotics.

A professor of psychiatry at Mayo Clinic named J. Michael Bostwick, M.D. voiced his support for Option 1, “Federal policy has failed to keep pace with recent scientific advances. Laboratory research has elucidated the far-flung endocannabinoid system that modulates neurotransmitter networks throughout the body through cannabinoid-1 (CB1) receptors that are preferentially distributed in the brain and cannabinoid-2 (CB2) receptors that are prominent in gut and immune tissues. Among dozens of cannabinoids in raw marijuana, two show medicinal promise. The first, Δ9-tetrahydrocannabinol (Δ9-THC), is the CB1 ligand that recreational users prize. The second, cannabidiol (CBD), acting on CB2, lacks psychoactivity but works synergistically with Δ9-THC to minimize “highs” and maximize analgesia.”

However, even Bostwick said that he only proposed the use of marijuana “when conservative options have failed for fully informed patients treated in ongoing therapeutic relationships.”

Those that voiced their opposition focused on the lack of evidence, lack of pedigree (place of origin), inconsistent doses, and side effects such as psychosis. Gary M. Reisfield, M.D., a professor at the University of Florida that is certified in anesthesiology and pain medicine commented saying that there is “little scientific basis” for physicians to endorse smoked marijuana as a medicinal therapy. “Smoked marijuana is a nonmedical, nonspecific, and potentially hazardous method of drug delivery. The cannabis plant contains hundreds of pharmacologically active compounds, most of which have not been well characterized. Each dispensed quantity of marijuana is of uncertain provenance and of variable and uncertain potency and may contain unknown contaminants.”

Many people like to make the argument that smoking marijuana is not beneficial, and point out that there are two prescription cannabinoids available to patients, Marinol and Cesamet, that patients should be ingesting orally in contrast to smoking. However, if they really believe that, then why aren’t these doctors recommending juicing cannabis or ingesting a high quality hemp oil (Rick Simpson Oil) as opposed to taking a single cannabinoid extracted in a laboratory?

Many doctors that commented on the poll questioned whether marijuana is even something that should be under a doctor’s discretion in the first place. We tend to agree with those that feel it shouldn’t be.