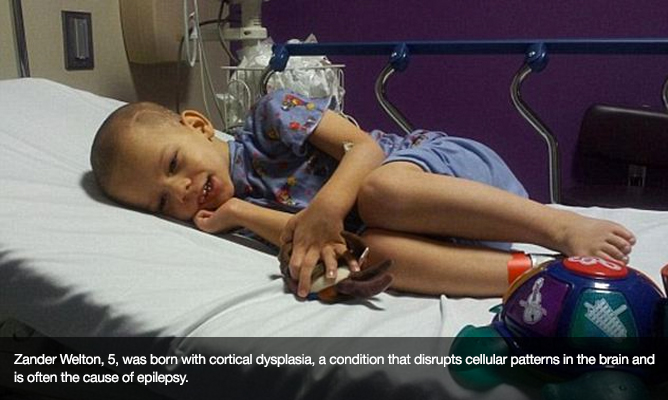 PHOENIX, AZ – Judge Katherine Cooper of Maricopa County this weekend made an extensive ruling of a lawsuit that permits 5-year-old Mesa boy Zander Welton, and those with similar conditions, legally able to use cannabis extracts to help treat their severe seizures from epilepsy.

In 2010, voters of Arizona approved the Arizona Medical Marijuana Act (AMMA). This was an incredible opportunity for Zander Welton and his loving parents to take advantage of Zander’s violent epileptic seizures that had started ever since he was nine months old. His seizures were so severe that Zander would sometimes stop breathing – which in turn slowed his cognitive development. Surgery was the only option for Zander, as doctors removed portions of his brain in two separate brain surgeries over the span of Zander’s early childhood. Despite the surgeries and the heavy pharmaceutical drugs accompanied with it, they failed to help Zander whatsoever and instead gave him harmful side effects. Every treatment turned out to be as ineffective as the last, as Zander’s parents desperately tried all they could to help their son.

“Jennifer, Zander’s mother, says cannabis was the one thing that finally helped her son.”

Then the Welton family was introduced to medical marijuana, both as an extract in the form of non-psychoactive cannabidiol (CBD) oil, and also in the dried plant form. It was a difficult decision at first, but Jennifer, Zander’s mother, says cannabis was the one thing that finally helped her son. He was able to walk backwards for the first time, he brightened up with smiles and laughter on his own, he started actively playing with his brothers, had maintained much more focus in kindergarten, and was finally able to sleep peacefully through the night. Zander’s family was stunned to see the incredible results brought by medical marijuana; he would go weeks without a single seizure, yet there was still a major problem. Although his parents did their research to give Zander the most effective dosage while conforming to AMMA’s guidelines, the threat of criminal prosecution for using the CBD oil – the most effective method for averting Zander’s seizures – still remained.

The ACLU Fights For Zander With A Lawsuit

Even though Arizona voted that it was time for medical marijuana to be legalized, Maricopa County Attorney Bill Montgomery threatened Zander and his family by claiming that using medicinal cannabis extracts (which are absorbed much better and are more effective with dosages) could result in prosecution. He interpreted that the AMMA did not include regulating cannabis extracts, but only dried flowers.

This struck fear into Zander’s parents who saw the most progress from the extracts. “My husband and I made the heartbreaking decision to stop giving Zander the medical marijuana oil,” stated Jennifer. As heartbreaking as it was, both Jennifer and her husband wanted to follow the law as strictly as possible so they could protect their beloved son from prosecution.

This led to the American Civil Liberties Union (ACLU) to help Zander and his family’s major issue. A lawsuit was filed in October of 2013 in order to seek clarification on what exactly Arizona’s Medical Marijuana Act states about cannabis extracts and using these extracts to treat seriously ill patients, challenging Montgomery’s interpretation of the law.

This past Friday, the ruling of the lawsuit was made nearly five months after being filed. The Maricopa County Superior Court ruled in favor of Zander, reassuring his parents and physicians that they could further treat his severe epilepsy with cannabis extracts without the fear of being criminally prosecuted. Judge Katherine Cooper concluded that nothing in the AMMA “limits the form in which patients may use medical marijuana… The AMMA authorized qualifying patients to use extracts, including CBD oil, prepared from the marijuana plant.” She also acknowledged that cannabis extracts “make it feasible for patients who cannot consume the medicine in plant form to receive it another way.”

According to ACLU Staff Attorney Emma Andersson, “Maricopa County had placed a cruel obstacle between Zander and the medicine that had drastically reduced his seizures. Now, thanks to the ruling, the county may no longer interfere with sick patients’ access to marijuana in the form that best suits their medical needs.” Jennifer and her husband will once again be able to give Zander the CBD oil that he desperately needs and couldn’t be any happier. “I am so relieved that we can give Zander the right form of this medication – the form that will provide him with the best benefit and help him have a fuller life,” she explains.

It was a long and arduous journey for Zander and his family, but they can now provide Zander with the only medication that has helped his severe illness – and finally without the fear of prosecution. “We hope this battle is over and that county officials will stop trying to keep Zander from his medicine,” stated Jennifer.