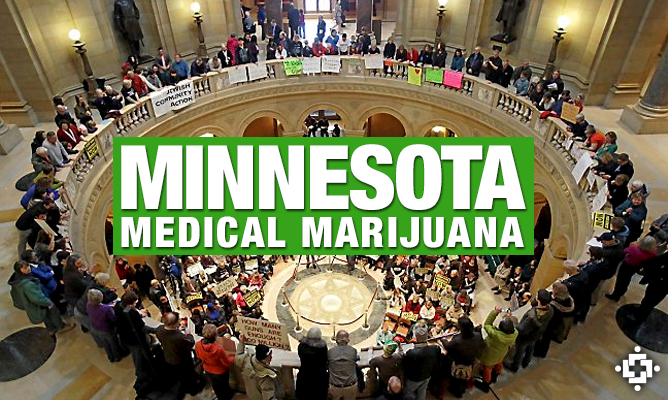 ST. PAUL. MN — On Tuesday, a medical marijuana compromise bill was approved by the Minnesota State Senate. This compromise will allow for legal access to medical marijuana for patients with specific medical conditions under unique and strict regulations. The bill now advances to the House of Representatives.

“Patients here are just as deserving as those in the other 21 states that have adopted effective medical marijuana laws.” – Heather Azzi

According to Heather Azzi, Political Director for Minnesotans for Compassionate Care, Minnesota is one step closer to adopting an effective medical marijuana program.

“Marijuana has proven medical benefits and those suffering from debilitating conditions deserve real access to it,” Azzi explains. “Patients here are just as deserving as those in the other 21 states that have adopted effective medical marijuana laws.”

Under the Senate bill SF 1641, Patients who qualify for medical marijuana must have a recommendation for cannabis from their physician. After acquiring a recommendation from a doctor, patients must apply for an state issued ID card. Once a patient obtains an ID card, they may only go to one of 55 state-regulated dispensaries – a patient can not grow their own medicine at home.

Last week, the Health, Human Services, and Housing division of the State Finance Committee amended the bill to prohibit patients from smoking medical marijuana. The measure goes on to clarify that “‘Smoking’ does not include the ingestion of cannabis through vaporization.” Meaning, although you cannot smoke your cannabis you may vaporize it.

“If Minnesota moves forward with this amendment, it would become the first medical marijuana state to disallow smoking.”

If Minnesota moves forward with this amendment, it would become the first medical marijuana state to disallow smoking. Although vaporizing has been proven to be one of the healthiest ways to consume cannabis, vaporizers that perform effectively can often cost as high as $700, making this method not easily accessible for most patients.

Further, personal accounts from medical marijuana patients reveal that vaporizers are often cumbersome to operate. Patients with severe and persistent muscle spasms, such as those who suffer from multiple sclerosis or Crohn’s disease, can find themselves weary of operating some vaporizers that require two hands because they are at high risk of dropping their expensive equipment.

Aside from vaporizing, the Minnesota compromise bill would permit patients to ingest medical marijuana through the form of topical administration, infused edibles, drinks, or pills. That being said, it should be noted that some patients with severe nausea may not find this to be the best method of delivery.

The companion to Senate bill SF 1641 is the House bill HF 1818, in which heavier restrictions are made. Under HF 1818, only those eligible for clinical trials can use medical marijuana. It would only allow one state-regulated manufacturer for researchers conducting trials to obtain medical marijuana (if a request to obtain from a federal supply isn’t accepted).

Additionally, patients would be required to use a vaporizer under close clinical supervision.

With two separate measure’s making their way through the Minnesota Legislature, some advocates are unsure of each bill’s future. Law enforcement groups have opposed the more lenient Senate bill while agreeing with the limited nature of the House bill. They have predicted that SF 1641’s dispensary model will raise the chance of cannabis being distributed illegally.

Gov. Mark Dayton has publicly stated that he supports whatever side law enforcement favors and will not sign a measure unless they are on board.