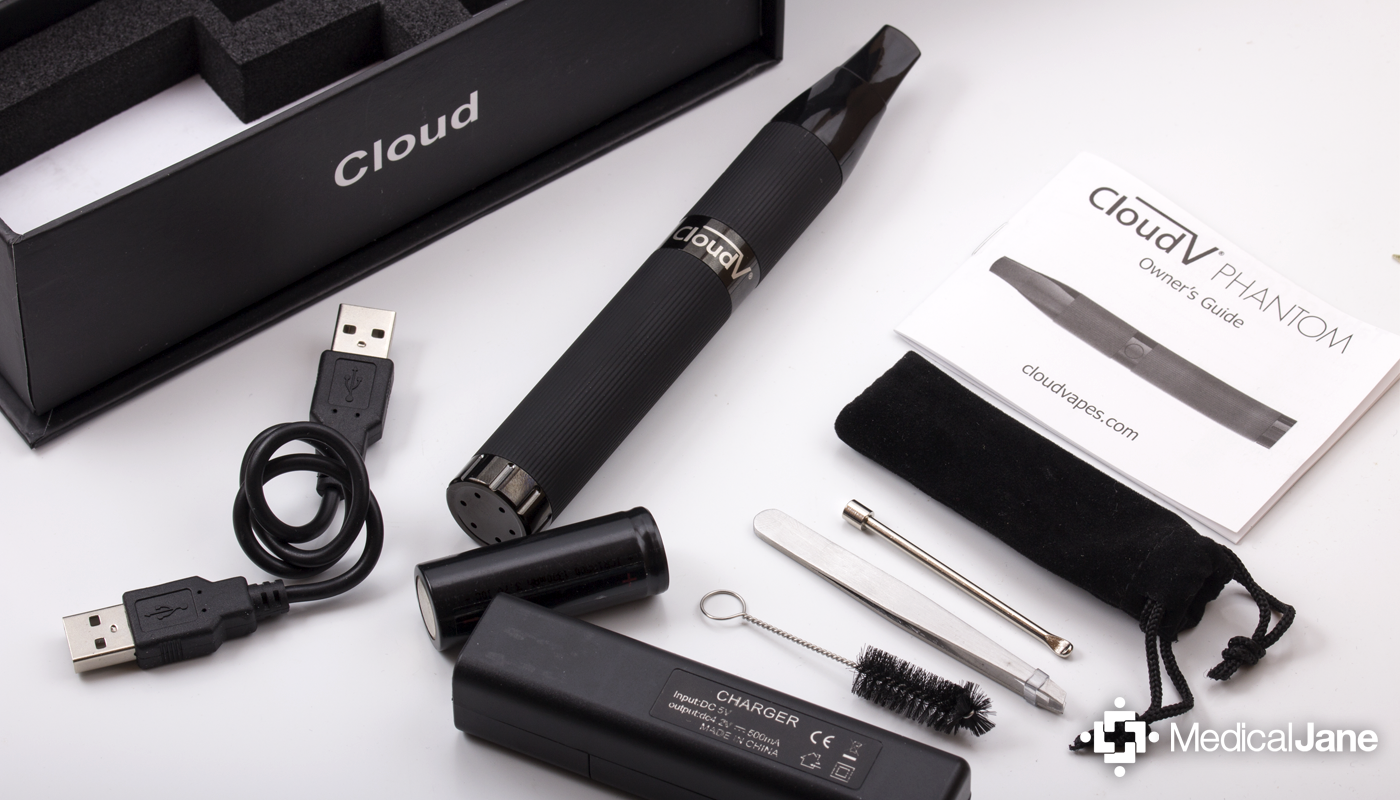 The Phantom dry herb vaporizer is the newest vaporizer out from Southern California based company, Cloud V Enterprises, who are familiar faces to the game of portable vaporizers. Known for their essential oil vaporizers such as the Cloud and the second generation Cloud Platinum, Cloud V Enterprises now introduces a powerful vape pen to the industry, specifically for dry herbs.

The Phantom is packaged in a rather attractive black box with a fold-down magnetic closure. Once opened, you’ll notice the Phantom in all her glory. Underneath the foam barrier is the rechargeable battery, charging dock, USB cord, owners guide, and tools to help load and clean the Phantom.

In the first batch of units made, only one battery is included. However, they will be shipping a second battery to every customer who purchased a Phantom once they receive them. A second battery is going to be included with every unit starting in October 2014.

The Cloud V Phantom vaporizer comes with a 1 year limited warranty with standard limitations, such as normal battery performance degradation, or neglecting to follow the cleaning guidelines.

The Phantom is simple, easy to use, and more importantly, easy to clean and maintain.

The owners guide recommended to charge the battery for six hours before use, so that is precisely what I did. However, upon closer inspection of the tools, I was really unsure of how to use the tweezers provided. Even with the instructions saying to use them to pick out the heating chamber to clean it, I found that using the cleaning brush alone was just enough to clean the chamber, without needing to remove it.

Having said that, I was still excited to use the packing tool, which came with a scoop on one end and a small weight on the other. The weight came in handy to pack the material down slightly, and I found the scoop end useful for emptying out the Phantom.

The Phantom dry-herb vaporizer is smaller than your average portable vaporizer. When compared to other pens on the market, such as the G Pro Herbal Vaporizer or the Pax, the Phantom is significantly sleeker. The Phantom has a glossy band through the center, with a textured grip all around the body. I noticed that even when I was screwing the battery cover back onto the pen, how durable and secure it felt.

The packing tool included comes with a scoop on one end and a small weight on the other. The weighted end came in handy to pack the material down slightly, and I found the scoop end useful for emptying out the Phantom.

The Phantom has a convection heating source, meaning the chamber does not actually ignite the herb on contact. Instead, heat is circulated throughout the chamber, vaporizing the herb inside from a green to a brown grind. With one heat setting at 428F, the dry herb inside is vaporized without any combustion. After testing different temperatures, those at Cloud V Enterprises found that 428F provided optimal vapor output.

The Phantom is designed with an automatic shut-off feature every two minutes, to prevent the chamber from overheating. I typically vaporize one loaded chamber two times before I emptied it into a container, where I save my AVB (Already Vaped Bud). The flavor did taste a little more on the burnt popcorn end towards the last few pulls, however, I knew that the Phantom was only doing its job in vaporizing the herb to the last bit.The pen is discreet and leaves a very minimal smell of vaporized cannabis in the air when in use. which does not linger like smoke from combusted plant material.

Cleaning the heating chamber out was a breeze, all it takes is popping the mouthpiece off and emptying the chamber inside. I typically cleaned the chamber between uses with the cleaning brush supplied, which took less than two seconds before I loaded the next bowl, or put the Phantom away for the day.

I did come across a problem once or twice while trying the Phantom out, which is clogging the filter. The mouthpiece is made from plastic that feels far less resistant than the rest of the pen, and the filter inside does not appear to be removable. With the filter inside the mouthpiece, I found that even with lightly packed bowls, the herbs would stick to the filter and cause the resin to clog the tiny holes. The instruction manual suggests using the brush cleaning tool to gently rub away the stickiness stuck to the filter, and then wipe with a cloth to ensure a clear airway. This technique worked to a certain degree, but I noticed the pull was not as strong upon my fourth and fifth uses.

What I liked about the Cloud V Phantom

What I didn’t like about the Cloud V Phantom

How the Cloud V Phantom can be improved

Best Deal From Around The Web
starting at [[bestOffer().price | currency]] + Free Shipping
starting at $119.00 + Free Shipping
The above pricing is based on US residents with no tax obligation. Please wait while we detect your location and show more accurate pricing.
We were unable to load pricing based on your location, the above price is assuming US shipping with no taxes.
Available from 9 sellers
Buy this product
From the MJ Directory Visit the directory

Cloud V Enterprises is the distributor of the Cloud Pen Vape, a portable pen vaporizer made for concentrate-use. The company was founded in 2011 and is currently based in southern California.Cloud V has garnered a …