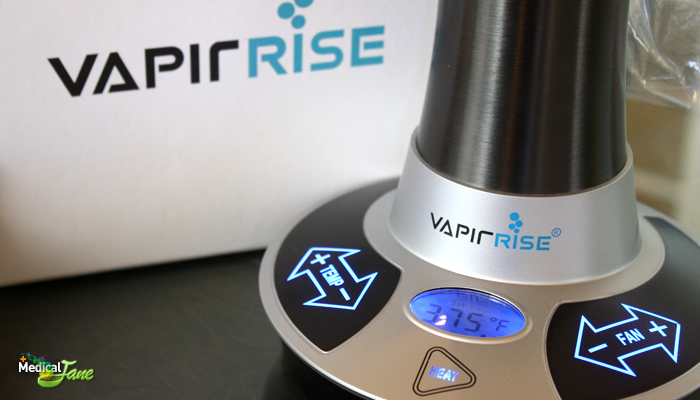 The Vapir Rise is a forced-air, convection style vaporizer that can be used with either a bag or whip-system. It comes equipped with a 4-way adapter, allowing four people to vaporize at once.

I was told by a representative at VaporNation.com that the Vapir Rise was designed to be an affordable competitor of the +$600 Storz & Bickel Volcano vaporizer, but when I heard that it only cost $250, I immediately had my doubts of it stacking up to other industry-leading products.

However, when I received the Vapir Rise in the mail I was pleasantly surprised by what Vapir had turned out. Despite the slight learning curve, which can be attributed to the 21 parts and 10 or more steps it takes to fill a bag, this vaporizer definitely performs as well as some of the top vaporizers I have reviewed in the past.

“For me, the Rise rates above the Arizer Extreme Q and right below the VapeXhale Cloud (VXC); it really just depends on the circumstance you find yourself in.”

While there is no question that the Vapir Rise is more sophisticated than the Extreme Q – with its valve system and extremely speedy heat up time of under 1 minute – it is always somewhat of a toss-up between the VXC and the Rise. The reason I say this is because the all glass pass-through in the VapeXhale Cloud provides for one of the purest vaporizing experiences available. I have not been able to taste the true flavor of my herbs with any vaporizer (while achieving dense vapor) like I can when using the VapeXhale.

It is without a doubt my go-to vape for whenever I am doing strain reviews, and it is perfect for those long vape sessions on the couch. However, when I’m doing work or getting ready for the day, the convenience of being able to leave the unit alone while it slowly milks a bag can’t be beat. Vapir did well by utilizing a ceramic heating element in addition to a HEPA air filter system to provide fresh and flavorful vapor.

All things considered, I wouldn’t go as far as to claim the Rise is better than the Volcano, but the low price point definitely makes it a great economical option. The one thing I wish Vapir had adopted from the Extreme Q is the remote control; that would be a nice touch.

How Do I Use The Vapir Rise Vaporizer?

To begin using the Vapir Rise, first turn the power switch on the back of the unit to the ON position. Blue LED lights will illuminate the front of the vape, the Rise is now in idle mode. You will hear a slight electrical hum but I’m not sure what causes the noise – I don’t think it’s the fan either.

Once the unit is on, set your desired temperature using the arrows on the front of the display and press the ‘Heat’ button to engage the heater. The button will turn red and the fan will kick on, notifying you that your Rise has begun to preheat.

You can adjust the speed of your fan and the temperature with the touch panel on the front of the unit. I like to set the Rise anywhere between 360-390 depending on what I wish to achieve from my vaporizing session (lower temps = more THC and flavor, higher temps = CBD & sedative effects. See Vaporizing for more info).

As you watch the temperature quickly rise – it takes less than a minute to get up to temperature – break up your herbs and fill your herb chamber. Securely snap your chamber adapter onto the top of the herb chamber, you will feel it snap into place. Once the “HEAT” button turns green you are ready to vaporize!

Once you’re this far, the process can differ depending on what delivery method you wish to utilize. If you’re using the single-user inhalation method, simply attach the silicon tube (after soaking it in warm water before first use) to the inhalation adapter and insert into the heating chamber by pushing down and twisting clockwise. You will feel the piece slide into place.

For balloon-mode, you must first follow the detailed instructions provided with your Vapir Rise to assemble the balloon adapter. Once you have your balloon assembled, grind your herb, fill your chamber, and snap the adapter into place the same way you would with the inhalation adapter. For anyone who has used the Volcano, the Rise’s bag set up is very similar to the Volcano’s “Solid Valve” system, and is easy to operate after one use despite its intimidating appearance.

Once you have either your whip system or balloon ready and secured in the heat chamber, press the “HEAT” button again to begin inflating the balloon or pumping vapor through the whip.

Lower fan speeds (1-5) will fill your bag with denser vapor, while higher fan speeds (6-9) will provide more of a flavorful, less-dense vapor. After the bag is full, switch the valve to “OFF” and you can remove the bag without fear of losing vapor.

When using the whip system, you do not have this luxury; so your vapor will continue to pour out in-between draws. I found that you can turn the heater off between draws, but this process becomes cumbersome and unsustainable. This is one of those things that I will just have to accept about the Vapir Rise.

One thing about the Rise that really bothers me is that anytime the heat is engaged, the fan will be on – though it idles at an extremely low speed. Whenever you decrease the fan speed to 0, the heater will turn off and your temperature will fall.

I found this to be more of an issue when using the whip/inhalation mode. Whenever I would pass the whip to another patient, it would lose a lot of vapor because the fan remained on. However, when using the Rise in balloon-mode you can turn the heater off between refills, which is nice because your herbs don’t sit and cook between bags.

An All-Glass Vapor Path Would Be Better…

Another thing I don’t like about the Vapir Rise is the use of plastic throughout the design. Vapir had a good thing going with the stainless steel column, but the whole top of the unit is made out of plastic; which is concerning because this is where the most heat comes from.

Additionally, the ‘inhalation adapter piece’ used for single-user inhalation is made completely of plastic and snaps into a stainless steel holster, which becomes very hot throughout the session.

It is a bit better with the bag system because a metal pass through engages the heater (very similar to the Solid Valve from Volcano) and makes for a stainless-steel pass through. In spite of that, the metal piece gets extremely hot and I could definitely see someone putting that right to his or her mouth to inhale instead of attaching the inhalation adapter; I’ve almost done it twice so far. The main body of the Rise gets very hot during long sessions as well, so be careful when moving the unit after use.

Although the heated plastic may not be a huge health concern, I would rather be safe than sorry, & thus prefer my vapor pathway clear of plastics and cheap metals. Nonetheless, I cannot discredit Vapir for their plastic parts because the Storz & Bickel uses the same amount of plastic (same type of plastic as well), if not more, in their balloon adapter and herb chamber for the Volcano. Granted, this plastic is not cheap feeling and would most likely be safe at the maximum temperatures the vape can reach.

“I found my oil pooled in one corner of the chamber and scooped it out immediately for proper dabs…never doing that again.”

My biggest beef with Vapir is because they claimed that the Rise was capable of vaporizing essential oils. This couldn’t be further from the truth; so don’t waste your cannabis concentrates. I dropped a glob in the oil chamber, turned the Rise to the maximum temperature – 400° F – and it blew three bags of nothing but air.

I disengaged the heater and tried to open the oil chamber to see what was going on inside, only to discover the “hot chamber grabber” they provide doesn’t work with the oil chamber. I had to wait until the chamber cooled down substantially so that I could grab it with a paper towel and pop it off the chamber adapter.

In Vapir’s defense, however, the Rise “essential oils” attachment is not meant for the types of oils I was trying to use; it is made to be compatible with actual aromatherapy oils.

Final Thoughts About The Vapir Rise

Overall, I was very impressed with the Vapir Rise. While I might not recommend it to older patients because of all of the rigorous steps and multitude of tiny pieces, I would absolutely suggest someone buy a Vapir Rise; especially someone looking to purchase an affordable and reliable table-top vaporizer.

If you already own the Arizer Extreme Q, it’s definitely not worth the upgrade for the fancy buttons and balloon valve system. However, if you don’t own a balloon vaporizer and are looking for an affordable alternative to the Volcano, the Rise is the perfect option for you. If I had to make the choice between the Arizer and Rise, the only thing that makes me want to choose the Arizer is still that handy little remote… HINT HINT Vapir.

Best Deal From Around The Web
starting at [[bestOffer().price | currency]] + Free Shipping
starting at $249.00 + Free Shipping
The above pricing is based on US residents with no tax obligation. Please wait while we detect your location and show more accurate pricing.
We were unable to load pricing based on your location, the above price is assuming US shipping with no taxes.
Available from 20 sellers
Buy this product