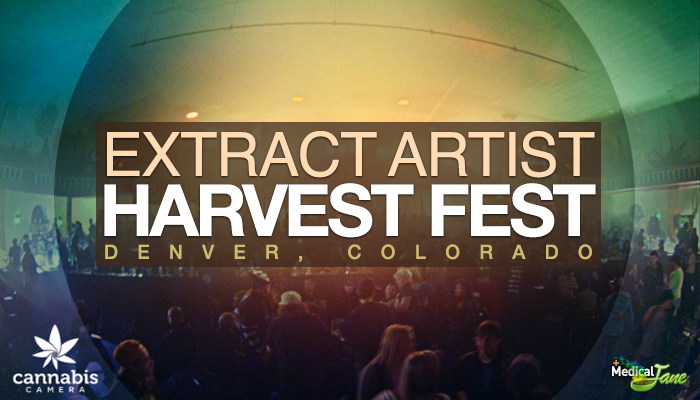 The annual Extract Artist Harvest Fest is cut from a different cloth when compared to other events in the cannabis industry. Instead of focusing on competition, like the 710 Cup and Cannabis Cup, the Harvest Fest is intended to provide a venue for the cannabis industry to celebrate extract artists, growers, and harvests alike. Last year’s event (the EA Bash) combined with the Secret Cup and was an obvious success – Denver’s Westword voted it the Best Cannabis Event in 2012.

Despite the success of last year’s EA Bash, the 2013 version “is already way bigger,” according to a press release. This year’s Extract Artist Harvest Fest was largely coordinated by Nikka T and is presented by Essential Extracts, Pinkhouse, and Cervantes Denver, in cooperation with GTD Entertainment – a Colorado company that produces events worldwide. It will be held Saturday Oct. 19 in both sides of Cervantes – the Masterpiece Ballroom and the Otherside – which means there will be ample space for attendees.

Thanks to Cervantes Denver, this years Harvest Fest will be held on both sides of their venue. Cervantes has a maximum capacity of 1,400 between the Masterpiece Ballroom and the Otherside. It is one of the top venues in Denver and has housed performances from the likes of De la Soul, DJ Premier and Pete Rock, and Slaughterhouse among others.

“This is a chance for all our cannabis community to celebrate the hard work they have endured during the harvest(s) together under one roof!”– Harvest Fest Press Release

Despite offering “minimal musical talent,” last year’s Harvest Fest sold out 2 weeks prior to the event. With that said, GTD Entertainment certainly helped amp up the 2013 lineup. Headlining the event will be hip-hop legend KRS-ONE, and the list of talent doesn’t stop there by any means. There will be an iconic performance by original members of The Pharcyde, in addition to appearances by Mr. Vegas, Edley Shine, Mountain Lion Band, BURNTmd, and DJ Nikka T himself to name a few.

Of course, musicians won’t be the only source of talent. Growers from all over will converge on the Mile High City to share their harvests without the competition-like atmosphere of most cups. With that said, anyone who attends the Harvest Fest will have an opportunity to win one of 3 awards: “Biggest Bud,” Strongest Aroma/Best Terp,” and a “Special Recognition” award for most outstanding contribution to the cannabis community/industry.

Judging from the number of Denver cannabis events surrounding Harvest Fest, there should be a great turnout from the community at large. The Secret Cup: Denver Awards Expo is the same day, and shuttles will transport attendees between the events. Also, the Champs Trade Show hits Denver the following week. According to the press release, “This is a chance for all our cannabis community to celebrate the hard work they have endured during the harvest(s) together under one roof!” I couldn’t have said it better myself.

Pre-sale tickets for the Extract Artist Harvest Fest are available through Cervantes Denver for $25. VIP packages cost $30, but prices will go up at the door. A portion of the proceeds will go to The Jenny Kush Memorial Fund.