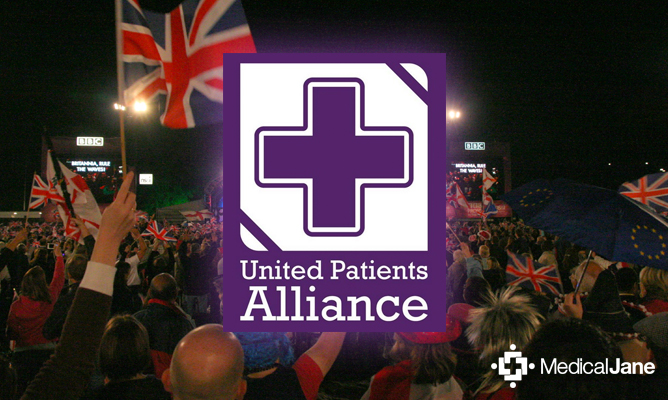 The use of cannabis extract medicine has risen dramatically over the past year, and the progress has not been contained to the United States and Canada. Awareness in the United Kingdom has been growing fast too, and a new organization known as United Patients Alliance (UPA) seeks to accelerate the progress.

The UPA formally launched on July 17th with an inaugural meeting at the Bright Helm Centre in Brighton, a southern town in Great Britain. The goal of UPA is to repeal the prohibition of medicinal cannabis in the United Kingdom and educate the public on the plant’s full potential.

Members of the UPA come from all walks of life, and many are patients who have used cannabis to ease their symptoms or directly treat diseases.

Notably, the launch was attended by a Member of Parliament named Caroline Lucas, the UK’s first Green party MP. Professor David Nutt and Jason Reed of Law Enforcement Against Prohibition UK also attended. These influential figures heard powerful testimonies of what cannabis has done for patients.

The Story Of Michael Cutler

One of the launch event’s speakers was Michael Cutler, who has taken on somewhat of a leadership position in the group. He told his story of combating terminal liver cancer with cannabis.

Cutler had originally been diagnosed with cancer in 2009, but a liver transplant temporarily solved the problem. Unfortunately, the cancer returned in late 2012, and this time nothing more than palliative care could be done.

Cutler was sent home with morphine and experienced a myriad of negative effects. During one of his moments of clarity, he made the resolute decision to find an answer. He found Run From the Cure online and acquired cannabis extract in the hopes it would eliminate his cancer. Within three days of taking the oil, he was able to get off morphine, a feat which shocked his doctor.

A couple months into the treatment, Cutler began coughing up what he thought was blood. His doctor told him it wasn’t blood, so Michael’s wife purchased a microscope with software so they could examine it personally. Through the use of these tools, the substance was identified as dead cancer cells. A subsequent biopsy at the Royal Free Hospital in London determined Cutler was cancer free.

Dailymail.co.uk, one of the most popular news websites in the world, ran a story on Michael Cutler’s remission. It has been shared almost 25,000 times in a week and sparked articles in other UK newspapers.

“We will change the laws. That’s why the United Patients Alliance was formed, to give patients a voice.” – Michael Cutler

Another member of UPA, Clark French, is a well-known multiple sclerosis (MS) patient who has used cannabis oil to control his disease. He also spoke at the launch event, and has made dozens of media appearances.

Cutler and French’s achievements alone have been enormous, but their true gift will be inspiring others to come forward and share their stories.

“We will change the laws,” Cutler proclaimed during his speech. That’s why the United Patients Alliance was formed, to give patients a voice. So let’s stand under that one banner, and be heard.”

The potential of UPA to instigate real change in the UK and around the world is real. With what they achieved in just a week, it will be intriguing to see what is possible in the next few months.