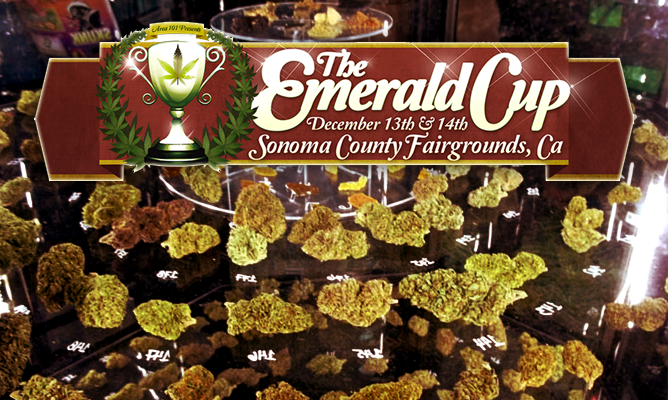 The Emerald Cup is all about celebrating the Emerald Triangle in North California and the wealth of quality that the local cannabis communities produce. The contest is entering its eleventh year and was originally exclusive to organically grown flower entries. This year, that is changing. The Emerald Cup 2014 now allows for other medicinal products ranging from solvent-less concentrates to infused edibles. Even topicals have their place.

There is also a Breeder’s Cup, where the final winner will be advertised in the Emerald Cup edition of Skunk magazine, win two tickets to a Jamaica vacation, and enjoy unlimited patient demand from dispensaries all over California. The breeder is supposed to have a line of products available to the prop 215 public. The final category is a photo competition that has to be taken from the 2014 season.

The 2014 Emerald Cup was held at the Sonoma County Fairgrounds, the same location High Times held their Cup back in June. The crowd was filled with many of the same faces and products, but the atmosphere was vastly different. It was much calmer, with kinder people. Jonah Tacoma of Dabstars wasn’t standing on a stage yelling over every other vendor.

“One of the most unique aspects of this competition was the fact that it cost no money for vendors to submit an entry into the competition(s).”

What I appreciated most was the sense that everyone was sharing the space equally. With so many modern cannabis events dominated by concentrates and lines to take free dabs, it is refreshing to see an event like The Emerald Cup stick to its roots.

That being said, The Emerald Cup 2014 did have a wide array of unique and topshelf products for medical marijuana patients to shop and sample. There was no wrong way to medicate and the options were virtually endless; no settling necessary. The artwork was inspiring and creative from hand-designed hats, professional photos done by DoobieDuck to one of a kind art by Grace Slick. Children are not normally seen at cannabis events, however, the Emerald Cup provided a children friendly area allowing parents to attend with their entire families. No children were allowed into the 215 area.

One of the most unique aspects of this competition was the fact that it cost no money for vendors to submit an entry in to the competition(s). They moved back the final due date for submissions twice, finally ending on December 1st. The judges were so overwhelmed with submissions to sift through, they had to eat an edible every few hours just to complete their judging requirements in time. This definitely leaves a lot to be questioned as to how accurately they could rate the effects of each product, but it was apparent that effort was taken to ensure that as many vendors as possible could enter without money being an obstacle.

Many big name giants in growing, extracts, edibles, and glass were in attendance. Ed Rosenthal had a table selling and signing his books, Dennis Peron was spotted walking around saying hello to fans, and DJ Short had a booth selling shirts and Blueberry space cakes. Hitman Glass‘s Dougie bought a booth across from Quinn Glass. The display of gorgeous heady pieces was a delight and many of the greatest pieces found loving and appreciative homes.

The Emerald Cup 2014: Home To Top-shelf… Everything

The Emerald Cup entries were kept visible in glass display cases inside the Hall of Flowers. The cluster of attention around the entries was nonstop, making it rather difficult to look through the entries carefully. With a total of 900 entries, there was a lot of cannabis to look over. For the looks of things, the Emerald Cup crew was overwhelmed by the turnout and the support. They sold out of tickets on the first day and hit maximum capacity by 3pm.

The food trucks that lined the streets outside of the 215 section carried delicious organic food, including vegan and gluten-free options. There was always hot coffee, chai tea, fresh juices, and vegan pies available. Even grilled cheese with bacon if you were lucky enough to catch the them before the bacon ran out.

Slightly Stoopid performed indoors at the close of the first night. The crowd was mesmerized. The energy that Slightly Stoopid was exuding made it clear they felt at home. The entire auditorium wouldn’t stop cheering until Slightly Stoopid came out for one final song. Tribal Seeds and Zack Darling opened for Slightly Stoopid, where they were joined on stage by Uncle Don Carlos. Reggae music filled the stadium and every once in awhile the lights would shine out on the crowd to display a dancing mass cocooned in a smoky ambiance.

The announcement of winners was hard to follow, but we have compiled a list of winners for the 2014 Emerald Cup best flower competition. The top 5 finalists are as follows:

The Emerald Cup is the world’s longest running outdoor organic growing competition. It is held every year in December after the Northern California outdoor harvest.Since its inception, The Emerald Cup has seen a notable rise …