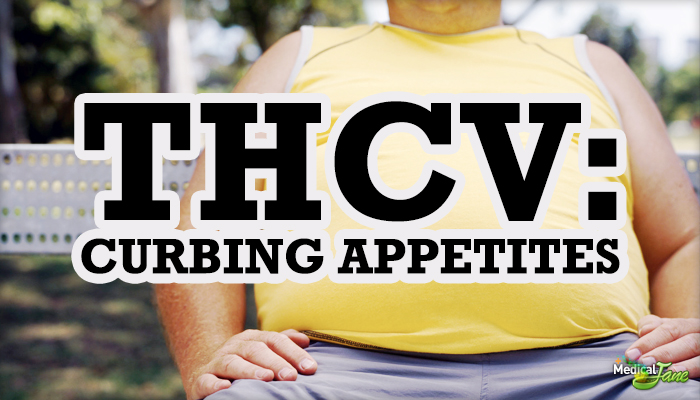 What Is Tetrahydrocannabivarin (THCV)?

As the name might suggest, tetrahydrocannabivarin (THCV) is very similar to the most famous cannabinoid, tetrahydrocannabinol (THC); THCV is like THC’s propyl cannabinoid cousin. Their chemical structure is nearly identical, but the process involved in their creation is slightly different.

Unlike THC, cannabidiol (CBD), and cannabichromene (CBC), THCV doesn’t begin as cannabigerolic acid (CBGA). Instead of combining with olivetolic acid to create CBGA, the geranyl phosphate joins forces with divarinolic acid, which has 2 less carbon molecules. The result is cannabigerovarin acid (CBGVA).

Once CBGVA is created, the process continues exactly same as it would for THC. CBGVA is broken down to tetrahydrocannabivarin carboxylic acid (THCVA) by the THCV synthase. At that point, THCVA can be decarboxylated with heat or UV light to create THCV.

The Benefits Of THCV

The relationship between THC and THCV is obvious in the effects as well. Although both cannabinoids effect the same receptors, they do so in a different manner. THCV is actually an antagonist of the CB1 and CB2 receptors, and is being studied for its use as an appetite suppressant.

THCV helps curb your appetite. It is likely one of the reasons why cannabis users are slimmer on average.

Researchers have already found a relation between the endocannabinoids and appetite. Expanding on these findings, they are interested in the potential for THCV to aid in fighting obesity. It’s believed that it blocks the rewarding sensations we experience when eating, often unhealthy, comfort foods.

Not only can THCV help you fit into that new pair of jeans, but it also has anti-convulsive properties. THCV seems to raise the seizure threshold for those with epilepsy. As a result, they experience less seizures.

High-THCV Strains Are Considered To Be Euphoric

Although tetrhydrocannabivarin does affect the same receptors in the brain as THC, it produces a much different high. THCV is psychoactive, but causes more of a psychadelic, clear-headed effect. It causes the effects of THC to hit you much faster, and some think it could be the reason for those “1 hitter quitter” strains. With that said, the THC effects also die off a bit more quickly with the presence of THCV.

A search for strains high in THCV at your local collective would certainly be rewarded. Some of the most beloved Sativas in the world are high in THCV. It is most prominent in African landraces, like Durban Poison, and the haze strains. Some breeders have started to focus on the production of more high-THCV strains, and more like TGA Genetics‘ Jack The Ripper would be a great addition.