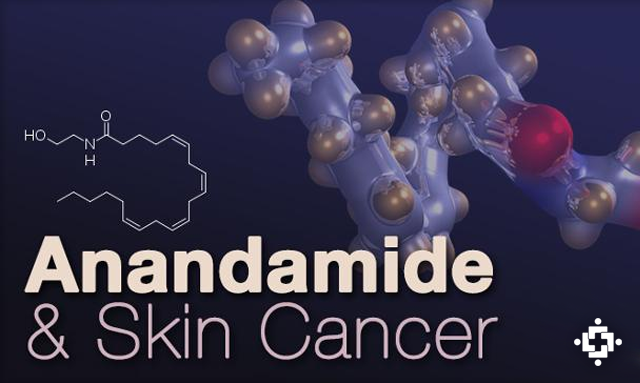 Proponents of medical marijuana often suggest that cannabis represents a milder form of cancer treatment. As a result, a number of oncologists (cancer scientists), have begun cannabinoid studies. A great deal of cancer research has focused on the phytocannabinoids, such as cannabidiol (CBD) and cannabigerol (CBG), however, recent research has investigated the endocannabinoids, which our bodies produce naturally.

A study published earlier this month in the European Journal of Pharmacology investigated the anticancer activity of anandamide, which affects the CB1 receptor and is similar to tetrahydrocannabinol (THC). In the study, a team of researchers from Italy and Switzerland found the endocannabinoid may have potential in the battle against skin cancer.

The European researchers investigated human melanoma cells to serve as a model of aggressive skin cancer. Melanoma forms as a malignant tumor in the melanocytes – the cells that help give skin its pigment. It’s been estimated that melanoma is responsible for 75% of skin cancer deaths.

“The primary cause of melanoma is exposure to UV light and it typically involves a darkening of the skin.”

The primary cause of melanoma is exposure to UV light and it typically involves a darkening of the skin. Usually, the first course of treatment is a surgical removal of the tumor, but mealanoma may return if it has penetrated multiple layers of skin. In recurring cases, the most common treatment is radiation or chemotherapy.

The research team used anandamide to test the benefits of cannabinoid treatment in the case of melanoma. In doing so, they found that small doses of the natural cannabinoid with a striking resemblance to THC may have a toxic effect on skin cancer cells.

According to the study’s results, anandamide may be involved in a complex mechanism that includes the CB1 receptor, and possibly GPR55 – a cannabinoid receptor in its own right. Although not much is known about GPR55, it is sometimes referred to as the CB3 receptor, because it responds to both endogenous and plant-derived cannabinoids.

The CB1 receptor’s involvement in anandamide’s effects begs the question, ‘Could THC have the same benefit?’

The CB1 receptor’s involvement in anandamide’s anticancer effects begs the question, “Could THC have the same benefit?” While more research will be necessary, it is reasonable to assume that THC-rich cannabis infused topicals may prove valuable in the treatment of melanoma. After all, Rick Simpson’s hemp oil seems to have had a great a great deal of success in that regard.

Melanoma is widely considered to be the deadliest type of skin cancer, and the most common treatment is anything but mild. As we know, cannabinoids have been used to counter the negative effects of chemotherapy, like nausea and heart damage. However, the recent results suggest that it may be possible to bypass the dangerous middle man, and treat aggressive skin cancers with natural cannabinoids directly.