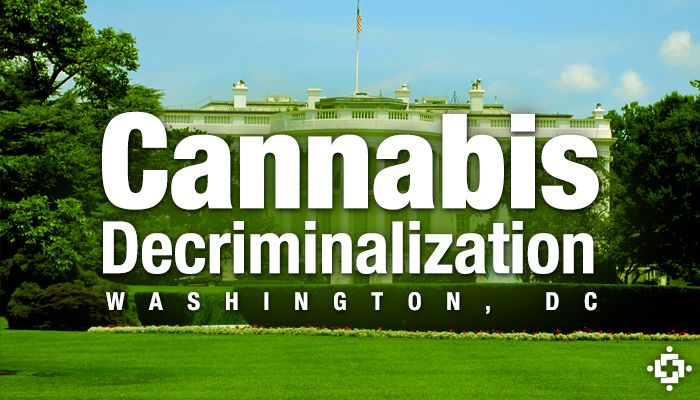 WASHINGTON, D.C. — As previously reported, there is a movement to decriminalize cannabis for personal consumption in the District of Columbia. The bill is expected to be passed early Wednesday by the Council Committee on the Judiciary and Public Safety.

Proposed by Tommy Wells (D-Ward 6), Council Committee Chair, in 2013, the measure calls for fines in the case of simple cannabis possession (less than one ounce). Those 18 and over would simply be subject to $25 fine – not much different than a parking ticket.

Mr. Wells aside, the Washington, D.C. Council Committee consists of four members – three of which have signed on to co-sponsor the initiative to decriminalize cannabis in the District. There is majority support from the remaining Council members as well, with 10 out of 13 agreeing to sponsor the bill.

As is the current landscape of cannabis in America, the policies in place are beginning to be questioned at the local and state level. This is evidenced by cannabis policy reform winning at the polls in 2013 and the introduction of retail sales in Colorado seems to have fueled the flame.

“It’s long past time we stopped arresting and prosecuting adults simply for possession of a substance objectively less harmful than alcohol,” says Dan Riffle, Director of Federal Policies for the Marijuana Policy Project. “As a former prosecuting attorney myself, I know that decriminalizing marijuana would reduce the burden on our limited law enforcement resources, and allow us to focus on real crimes and real threats to public safety.”

“Decriminalizing marijuana would reduce the burden on our limited law enforcement resources, and allow us to focus on real crimes and real threats to public safety.” – Dan Riffle

A report released in June by the American Civil Liberties Union reveals that the District has the nation’s highest arrest rate for cannabis possession. 846 arrests per 100,000 people were made in 2010, equating to almost $18,000 in costs.

Further, blacks are eight times more likely than non-blacks to be arrested for simple possession.

According to Public Policy Poll conducted by the Marijuana Policy Project (MPP), three out of four Washington, D.C. voters are in favor of a move to decriminalize cannabis. As of now, possession is considered a crime punishable by up to six months in prison and a fine up to $1,000.

The same poll revealed that 67% of D.C. voters believe law enforcement resources should be put to use outside of cannabis prohibition.

UPDATE: It has been reported that the Council Committee on the Judiciary and Public Safety has unanimously voted to pass the measure. They are expected to do so after language is added to prevent police officers from searching “suspects” unlawfully. The aroma of cannabis would not constitute probable cause under the proposed change.