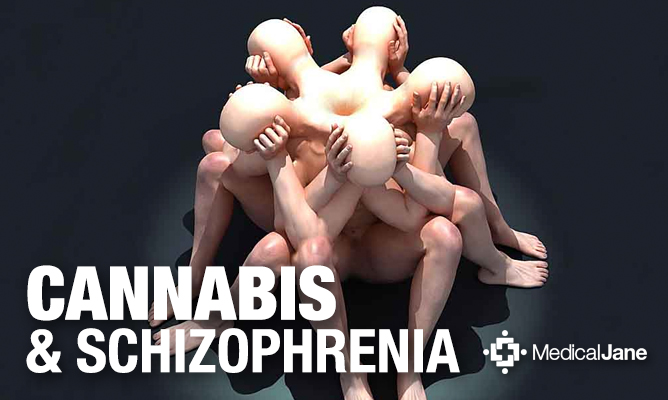 There has been an abundance of conflicting information about the potential relationship between schizophrenia and cannabis. A controversial study published in December suggests that smoking cannabis may exacerbate a genetic disposition that makes people more vulnerable to schizophrenia, but multiple studies [1,2] have shown that the plant can greatly benefit schizophrenic patients.

In hopes of expanding our knowledge on this relationship, a group of researchers from the University of Manchester (UK) and the University of Lancaster (UK) published “The Impact of Cannabis Use on Clinical Outcomes in Recent Onset Psychosis” in Schizophrenia Bulletin last month. Their results suggest that cannabis does not worsen the experience of schizophrenia, and it may in fact help.

Schizophrenia is a chronic psychological disorder that affects around one percent of the American population. There are a number of signs and symptoms of the condition, and they are often divided into two categories: positive symptoms and negative symptoms.

Positive symptoms are those which are not experienced by the general population. Common examples of these include delusions and psychosis.

Negative symptoms, on the other hand, are impairments of typical functioning; they are typically more difficult to treat than positive symptoms from a behavioral perspective. Some examples of negative symptoms include a lack of emotion and an inability to experience pleasure (anhedonia).

“Cannabidiol (CBD) might offer the sort of improvement in sensory gating (the brain’s ability to block out unnecessary information) necessary for the treatment of schizophrenia.”

There is no cure for schizophrenia, and existing treatments are primarily aimed at controlling symptoms. Many of the treatments commonly used have the potential to cause a laundry list of side effects, including increased sensitivity to light, seizures, and attention deficits.

Because of this, researchers have been searching for a course of treatment with a less drastic side effect profile. A Brazilian study published in the journal “Frontiers in Pharmacology“determined that cannabidiol (CBD) might offer the sort of improvement in sensory gating (the brain’s ability to block out unnecessary information) necessary for the treatment of schizophrenia.

Led by Christine Barrowclough, PhD, the British research team set out to examine how cannabis impacts the outcome of clinical treatment for schizophrenia. They were specifically interested in whether changing a patient’s pattern of consumption affects their psychotic symptoms, affective symptoms, functioning and the possibility of psychotic relapse.

Barrowclough’s research team recruited a sample of 110 people in early psychosis with a comorbid diagnosis of cannabis abuse or dependence (according to the DSM). The study consisted of repeated measures of substance abuse at four different points in time (baseline, 4.5 weeks, 9 weeks, 18 weeks) and random intercept models to determine A.) the effects of a cannabis dose on subsequent clinical outcomes and B.) whether changes in a cannabis dose was associated with a change in clinical outcomes.

According to the results, “There was no evidence of a specific association between cannabis use and positive symptoms, or negative symptoms, relapse or hospital admissions.”

“Reducing the amount of cannabis consumed led to a statistically significant change in anxiety scores.”

However, Barrowclough goes on to say that greater doses of cannabis was associated with higher levels of anxiety and depression.

Interestingly enough, reducing the amount of cannabis consumed led to a statistically significant change in anxiety scores, but depression was unaffected. Cognitive functioning saw an improvement when the cannabis dose/intake was reduced also.

It’s worth noting that patients who consumed cannabis showed better cognitive functioning overall: “Cannabis use was associated with an improvement in general functioning, a finding that was also evident in our earlier study with a sample of patients with longer illness history.”

In conclusion, Barrowclough’s research team determined that smaller doses of cannabis “may be directly associated to improvements in anxiety and cognitive functioning in schizophrenic patients, but not other specific symptoms.” They are calling for more research to be conducted in order to gain a deeper understanding of this “clinically important area of study.