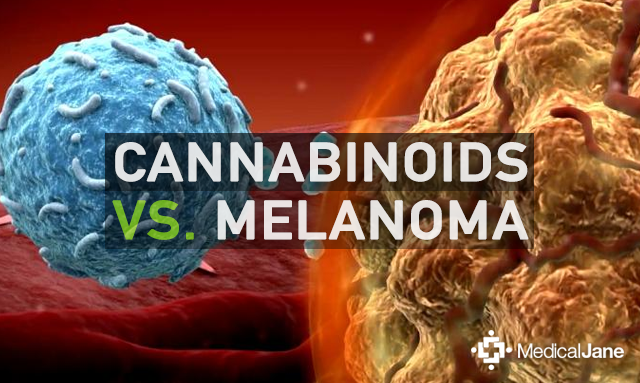 Study: Cannabinoids Found in Cannabis May Decrease the Viability of Melanoma Cells

Phytocannabinoids in the Treatment of Melanoma

An in-vitro and in-vivostudy published in the Journal of Investigative Dermatology in February 2015 found that treatment with delta-9-tetrahydrocannabinol (THC) and cannabidiol (CBD) helped to decrease the viability of melanoma cells.

Cells perform autophagy, a process designed to clean out intracellular debris (e.g. old cell parts [organelles], proteins that are no longer needed, etc.) with the help of lysosomes (organelles that contain enzymes that help to break down proteins, fats, sugars, DNA and RNA building blocks, etc.). Previously collected evidence has shown that in the first phases of cancer development, autophagy is useful in helping to prevent cancerous growth. However, in later stages, autophagy may actually contribute to the formation of cancer by providing resources to cancer cells that help in maintaining survival. In this study, researchers explored whether or not cannabinoids could induce apoptosis (i.e. programmed cell death), and what role autophagy played in this induction, in melanoma cells.

Melanoma is a type of skin cancer, caused by an overproliferation of abnormal melanocytes (cells of the skin that produce melanin, a skin pigment), and is often the result of damage caused by the sun’s UV rays. Although cell abnormality begins in the skin, in later, more advanced stages, cancerous cells can metastasize (i.e. invade distant organs), causing extensive damage and, if uncontrolled, death.

In men, melanoma most commonly occurs on the chest and back, and in women, the most common site is the legs. Melanoma is also frequently found on the neck and face.

Melanoma cases have been rising over the past 30 years. While new discoveries are helping to increase success in the treatment of melanoma, some patients do not respond. Therefore, development of novel treatment options are imperative in helping to increase remission rates for patients with melanoma, especially since melanoma cases are increasing.

How Can You Detect Melanoma?

The most effective way to detect melanoma is to attend annual visits with your dermatologist, who will monitor any unusual or new growths and perform biopsies on skin lesions that have the potential of being skin cancer. Individuals with a family history of melanoma should especially make sure to schedule and attend these yearly visits.

You can use the following guidelines to determine whether or not a mole or patch may need further evaluation by a health care provider:

If you find a spot that may be abnormal (in accordance with the above guidelines, or unusual/different from your other skin markings in any other way) make an appointment with your dermatologist. Sometimes skin lesions look a little strange, but end up being benign (i.e. not harmful), but the only way to be certain is to visit your dermatology-trained health care provider. Catching melanoma early, before it has the potential to spread to other organs, is essential in increasing chances of remission and decreasing chances of death as a result of melanoma.

How Can You Prevent Melanoma?

To help prevent melanoma, sun exposure should be limited. Individuals should cover their skin with clothing as much as possible (i.e. long sleeves, pants) and wear hats to limit exposure to the face. Broad-spectrum sunscreen (which blocks both UVA and UVB rays) with an SPF of 30+ and zinc oxide/titanium dioxide (which act as physical, rather than chemical, sunblocks) should be worn daily, and sunscreen should be reapplied after sweating, swimming, or showering (don’t forget to apply to your ears, hands, nose, and any other exposed areas). Tanning beds should be avoided. Preventing sun exposure will also prevent the skin from aging prematurely (e.g. forming wrinkles).

Although adequate Vitamin D levels are essential for the absorption of calcium and can be produced by the body as a result of direct sun exposure (i.e. no sunscreen or clothes covering your skin), only a few minutes in the sun are needed (depending on your skin tone). Vitamin D levels can also be increased to adequate levels by eating foods that contain Vitamin D (found in fatty fish like salmon and tuna, cereal or milk fortified with Vitamin D, egg yolks, etc.) or taking Vitamin D supplements (if dietary intake/sun exposure are inadequate. However, care should be taken (especially by individuals with liver or kidney problems, or who take thiazide-like diurectics) to not increase Vitamin D to excessive levels, so that toxicity can be avoided.

Studying human melanoma cells in-vitro (i.e. outside of the body), researchers found that administration of THC helped to increase melanoma cell death by way of autophagy-dependent apoptosis, possibly by way of the followingpathway:

The researchers note, “when lower doses of THC are combined with CBD the anti-tumour effect was enhanced in vitro”. While the use of THC alone helped to decrease melanoma cell survival, use of a caspase inhibitor (i.e. an agent that prevents activation of enzymes that induce apoptosis) helped to increase melanoma cell death even further. Importantly, while THC helped to increase cell death in melanoma cells in a dose-dependent manner (i.e. the higher the concentration used, the more cell death that occurred), there was no increase in cell death in normal melanocytes (up to a THC concentration of 6 µM, which is beyond the concentration needed to induce cancer cell death). Therefore, THC treatment destroyed abnormal/cancerous melanocytes, but, importantly, did not destroy normal cells.

Using mice as models for humans with melanoma, researchers evaluated the use of whole-plant cannabis extract with a 1:1 ratio of THC (similar to Sativex) for the treatment of BRAF wildtype melanoma, which is a form of the disease that has limited treatment options. They found that treatment with the 1:1 THC:CBD extract, at a concentration of 1 µM of each, helped to decrease melanoma cell survival, even more than treatment with THC alone. In contrast, temozolomide, a chemotherapy agent used to treat glioblastoma multiforme, had a small effect. According to the researchers, “Collectively these data suggest THC and Sativex-like are more effective than temozolomide in terms of apoptosis induction and anti-tumour response, further validating the therapeutic relevance of cannabinoid treatment for melanoma.”

These results are particularly impressive given that alkylating agents, like temozolomide (that work by damaging DNA), although effective in reducing cancer cell growth/increasing cancer cell death in certain types of cancer, can have severely harmful side effects, which may include the formation of new types of cancer. The use of cannabinoids, on the other hand, has been shown to be generally well-tolerated with minimal negative side effects.

Additionally, according to the researchers, “CBDinduces apoptosis via the production of reactive oxygen species [agents that cause cell and tissue damage] and caspase activation in cancer cells… indicating THC and CBD engage different molecular machinery which cooperate to promote tumour cell death.”

These results add to a growing body of evidence that suggests that cannabinoids may be useful for the treatment of various types of cancer (breast, prostate, lung, skin, pancreatic, brain, bladder cancer, leukemia). Specifically, they demonstrate that the use of phytocannabinoids may be useful in the treatment of both BRAF-mutated and BRAF-wildtype (i.e. “normal” BRAF) melanoma. This is especially important for patients with BRAF-wildtype melanoma, given the limited treatment options for this form.

In contrast to alkylating agents used in chemotherapy treatment, phytocannabinoids have so far shown to have a highly favorable safety profile, which provides an additional rationale for increasing research on whether or not cannabinoid therapies are effective for the treatment of cancer, including melanoma.