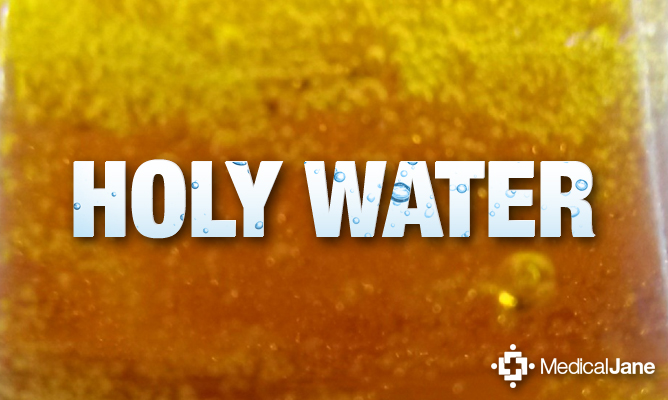 HolyWater, Live Resin, and The Future Of Terpene-Rich Cannabis Concentrates

Cannabis concentrates have really jumped to the forefront of the industry in recent years. An increasing number of patients are being turned on to the rapid relief offered by portable vape pens and glass concentrate rigs that allow you to intake a high concentration of cannabinoids in a matter of seconds.

Traditionally speaking, many concentrate makers have made it a point to strive for the highest percentage of tetrahydrocannabinol (THC) in their product as possible. But increasing knowledge about terpenes and their interaction with cannabinoids found in the cannabis plant has brought about a great deal of interest in a new class of terpene-rich concentrates.

What is Live Resin? What is HolyWater? What is Terp Sap?

If you’ve been paying close attention to the concentrate community, then you’ve most likely heard the term HolyWater at some point. With a host of positive endorsements from cannabis industry icons, it seems clear that we’re seeing the next step in the evolution of concentrates.

That being said, there has been a bit of confusion as to what the product actually is; some people have said that there is water in the final product and others have suggested that there are high levels of residual butane. However, results from recent lab-tests have shown both of these assumptions are false.

“Most samples of concentrate clock-in with around 4% percent total terpenoid content. HolyWater, on the other hand, has routinely been tested with 20% terps or more.”

HolyWater is in fact BHO – this means the process is simlar to most samples of shatter, wax, etc. that you would find at your local collective. What sets HolyWater apart is its high terpene content, which gives it more of a sappy, liquid consistency.

Addison DeMoura, COO of Steep Hill Halent Labs, is a self-proclaimed concentrate lover and has seemingly made it his mission to help improve the community’s knowledge on the topic. As he explains, the aroma from a one-gram container of HolyWater is comparable to that of “a whole bag of weed.”

DeMoura goes on to say that most samples of concentrate clock-in with around 4% percent total terpenoid content. HolyWater, on the other hand, has routinely been tested with 20% terps or more.

Upon hearing this, many people jump to the conclusion that HolyWater must contain a certain amount of terpenes that were reintroduced to the formula at some point. This is true of products like The Clear, in which food-grade terpenes are added to enhance the flavor profile, but HolyWater is a different beast altogether; they have simply dialed in a process that allows them to preserve a much higher percent of terpenes found in the live cannabis plant. Interestingly enough, HolyWater still clocks-in with nearly twice the terpene content of most batches of The Clear.

What Are The Benefits Of Live Resin Extractions?

Earlier this week, I had a chance to speak with Rob SpOILed of the SpOILed Patients Collective. He studied under Eric “the pope” Heisenberg, who was the first to dial-in the HolyWater method some five years ago, and has won multiple awards in this year’s competition circuit with their Terp Sap. According to Rob, much of the secret lies in the freshness of their source material.

“As much of 60% of a plant’s terpene content is lost during the drying process.” – Kenneth “K” Morrow

Most concentrate makers prefer to work with material that has been dried out, much like it would have been if it were being distributed as flowers. Heisenberg’s HolyWater and SpOILed’s Terp Sap are often produced using freshly harvested plants, which has led to it being referred to as “live resin” in many cirlces. This process allows them to retain much more of the plant’s original aroma and flavor profile. (Note: Due to their proprietary extraction method, HolyWater has tested above 10% terpenoid content even when using dry material)

As explained to me by Kenneth “K” Morrow, founder of Trichome Technologies, the Handbook of Essential Oils reports that as much of 60% of a plant’s terpene content is lost during the drying process. Compound that with the terpenes that are lost in the midst of your typical extraction and we’re left with just a fraction of the terpenes found in the resin of a live cannabis plant.

Morrow is no stranger to this problem, and he has been working with Across International to develop a terpene isolator in order to help concentrate makers capture these pure terpenes and later reintroduce them to their high-THC concentrates. That being said, he expressed his sentiments that HolyWater is “a very incredible product.”

Terpene-Rich Concentrates: Next Step In The Evolution Of Cannabis?

The amount of flavor found in one tiny bottle of HolyWater or Terp Sap is enough to change a person’s perspective on the amount of flavor that concentrate makers can achieve. It seems obvious to me that we will one day look back on these terpene-rich concentrates as the next step in the evolution of cannabis.

I would expect HolyWater’s liquid consistency to be nearly perfect for use with portable vape pens like the Cloud Platinum, Vaped Nano, and the Dr. GreenThumb X Cloud Pen. However, it will be runnier than what patients who prefer to dab their concentrates are used to – Rob SpOILed suggests using a spatula or a spoon to help solve the issue of dripping.

“Patients who are looking for a high dose of THC from their dabs are able to get the best of both worlds by mixing a bit of Holy Water with their favorite concentrate.”

Still, these terpene-rich concentrates are already becoming a favorite among connoisseurs. Those patients who are looking for a high dose of THC from their dabs are able to get the best of both worlds by mixing a bit of HolyWater or Terp Sap with their favorite concentrate.

In fact, Addison demoura told me that a mixture of the “HolyWater” & The Clear Raw (often tests around 90% THC), first mixed and coined the “Holy Grail” by Lil Wolverine, is his favorite thing to dab lately; it allows him to get the sort of flavor he loves from the HolyWater and the high dose of cannabinoids his body needs from The Clear.

While most of us are just now catching up to speed as far as these terpene-rich extracts are concerned, some concentrate makers have already started to take things one step further, using food-grade terpenes as their extraction solvent. Horatio Delbert astonished his fellow competitors at the Pacific Northwest Secret Cup earlier this year when he unveiled his limonene honey oil (LHO).

Questions remain about whether or not butane is the safest possible solvent to use when producing concentrates, so the more options patients can choose from the better. As cannabis becomes more accepted in the mainstream, people will continue to evolve their extraction processes – this can only be positive as the industry develops.