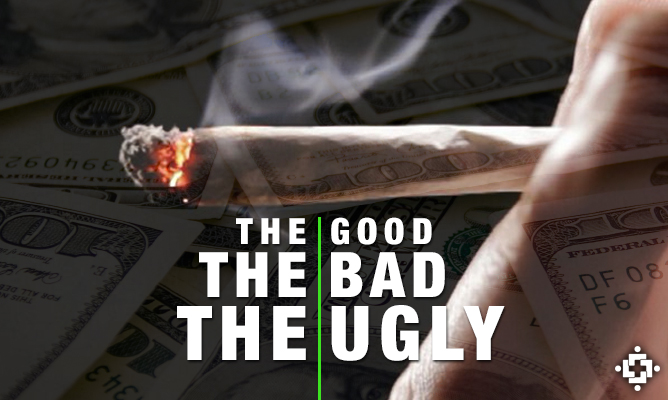 Cannabis Goes Commercial: What Does It Mean For The Industry?

At this point, Americans are pretty much in agreement that cannabis will be legal at some point. In fact, a poll released by the Pew Research Center earlier this week revealed that 75% of those who participated in the survey believed that to be the case. It’s only a matter of time.

Another sure bet is that the cannabis industry will experience a great deal of change – it’s happening already. Venture capitalists and angel investors are seriously considering the cannabis sector these days (e.g. Privateer Holdings).

“The big money has yet to flow into the industry, but I can assure you it’s coming.”

Up until recently, many cannabis industry investors were only willing to touch ancillary businesses. However that is all starting to change. Investors are less hesitant to throw money at businesses that actually touch the cannabis plant, infused edibles, cannabis concentrates, etc. For instance, 60% of Bhang Chocolate was recently acquired by Mentor Capitol, but it’s anyone’s guess how that situation will unfold.

The big money has yet to flow into the industry, but I can assure you it’s coming — and much sooner than you might think. There are a few schools of thought about what it all could mean, and I thought I’d offer you an industry insider’s perspective.

Some of the most obvious positives that will come as a result of the commercialization of cannabis will be increased access to quality product (presumably), and the creation of thousands of jobs. However, it does not stop there.

As pointed out by UpToke COO Jessica Riley, the increased acceptance of cannabis is bound to inspire top talent to make a difference in the industry. We are already seeing a fair amount of this, with services like 420 Investor and the MANTIS Ad Network surfacing to address legitimate concerns for the cannabis industry moving forward.

This increased surge of professional talent into the industry could bring about a new perspective about how cannabis-related products are marketed. All too often canna-businesses dig themselves into a hole by placing too much focus on the traditional “stoner” market, instead of the average person. I think it’s pretty safe to say that most of us who enjoy cannabis would not fit those outdated stereotypes, and it’s about time that people take notice.

Furthermore, cannabis becoming more mainstream means that the people who have dedicated their life to the plant will have the opportunity to make a comfortable living for themselves through legitimate means for the very first time.

Those who have a valuable service to offer and make the right entrepreneurial moves could be in a position to make a serious impact on the world. Perhaps we could see something similar to the Downtown Project that is revitalizing Las Vegas, which has been headed by leaders in the technology industry like Tony Hsieh, CEO of Zappos.

Of course the effects of cannabis going commercial will not be all positive. In fact, there are quite a few ways that things could go downhill quickly.

A large part of what makes the cannabis industry special to so many people is that most canna-business owners care more about quality than they do about profits. Unfortunately, the increased acceptance of cannabis in America has brought about a surge of entrepreneurs who see the end of prohibition as their golden ticket.

“There’s no reason that we should see 27 versions of a vaporizer pen that we all know is basically the same product.”

Thanks to this, the market is becoming saturated with cookie-cutter business models that bring no additional value to the industry. I’m all for capitalism, but what’s the point of entrepreneurship if you’re not bringing something new to the table? There’s no reason that we should see 27 versions of a vaporizer pen that we all know is basically the same product.

Don’t get me wrong, I completely understand the importance of patents, trademarks, and intellectual property when it comes to protecting your business. But the cannabis industry will never progress as quickly as it should if everyone is busy reinventing the wheel. We should be working together, sharing knowledge about things like the proper purging methods for cannabis concentrates so that the industry may continue to evolve at the rate it has in recent years. For example, Nug Run Concentrates has been running a series of tests with Steep Hill Halent that should offer some insight on the topic of purging in the near future.

Mickey Martin touches on this topic in his recent blog post, “Go Fuck Ourselves,” making the argument that the cannabis industry is its own worse enemy.

“So who is the enemy. It is us…or at least people who are pretending to be us…” – Mickey Martin

“So who is the enemy?” he asks. “It is us… or at least people who are pretending to be us… They are using their money and influence to limit competition and to sucker people out of their hard work and intellectual property.”

Specifically mentioned in the article is the Realm of Caring Foundation, which is a group that has spent the last several months crusading for access to CBD-rich cannabis oil. A screen shot of an email exchange involving Wisconsin legislators suggests the foundation prepared a “template” for CBD-only legislation for the State, which flies in the face of emerging evidence that whole-plant cannabis medicine is typically more effective than CBD alone.

Of course, Realm of Caring is not the only group that has been accused of pushing their personal agenda to benefit themselves. Various lab testing facilities have faced the very same accusation as they push for mandatory testing in newly-legal markets. While I believe that all medical marijuana should be lab-tested for safety, the argument is not without merit.

A few weeks ago we published an article warning the public about snakes in the grass – namely Medical Marijuana Inc.’s (MJNA) multi-level marketing scheme called Kannaway. Meanwhile, there are a few developments underway within the cannabis community itself that could be just as disturbing.

We’ve come too far to let money and corruption ruin everything that makes the cannabis industry great. It’s vital that we make sure everything we do from this point forward benefits the industry as a whole. If you can make money along the way, great! But that should never be the priority. If it is, then you might find yourself outside of the cannabis community looking in.